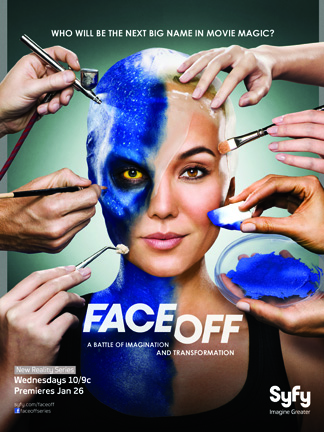 With the 83rd Academy Awards nearing, achievements in films include the specialized category of Visual Effects, or the “VFX Oscar Race”. SyFy will premiere a reality series that will focus on the challenges of working in the special effects film industry in a competition format. 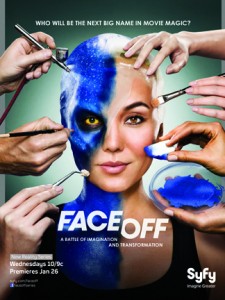 SyFy network is creating drama in the world of special effects artists in Hollywood with a new reality show titled “Face Off”. The new SyFy reality show will be hosted by McKenzie Westmore (Passions, Star Trek: Voyager, Star Trek: Insurrection)

The series will feature 12 up-and-coming make-up artists who will compete against each other to win the title of being “the country’s next great SFX artist”.

The 12 competitors, like all reality show competitions, must go through a series of challenges that decide who will be eliminated and who will stay each week. Judging the competition are — three-time Academy Award winner Ve Neill, famed special make-up effects artist Glenn Hetrick and creature designer/film director Patrick Tatopoulos. The judges will strive to push contestants to become more successful in their craft.

Guest judges include: Sean Cunningham (Friday the 13th), body painter Filippo Ioco, Greg Nicotero (The Chronicles of Narnia: The Lion, the Witch and the Wardrobe) and Michael Westmore (Star Trek: The Next Generation).

The winning SFX artist will receive $100,000 and a year’s supply of make-up courtesy of Alcone.

One example of what viewers can expect to see from elimination challenges will have contestants creating a new species (human/animal hybrid), based on one of three exotic animals – a beetle, an ostrich or an elephant. The contestants must work in teams of two and utilize their skills of molding, sculpting, prosthetics and an involved application process on live models. Future elimination challenges include application of full body make-up to nude subjects, conceptualizing a creature that would inhabit a newly discovered planet, creating an original horror villain and transforming a bride into a groom and a groom into a bride.

SyFy is holding a “Fan Face Off Challenge” where you can enter their contest to create your best Sci-Fi or Horror work! More details here: http://www.syfy.com/faceoff/challenge

“Face Off” premieres Wednesday, January 26 at 10/9C on SyFy channel. Maybe the winner of “Face Off” will be picking-up their own future Oscar. The seven films that have been nominated this year in the Visual Effects category for the Academy Awards are: Alice in Wonderland, Harry Potter and the Deathly Hallows Part 1, Hereafter, Inception, Iron Man 2, Scott Pilgrim vs the World, and Tron: Legacy.