THE VOICE: Jesse Campbell – The Battlefield of Life! 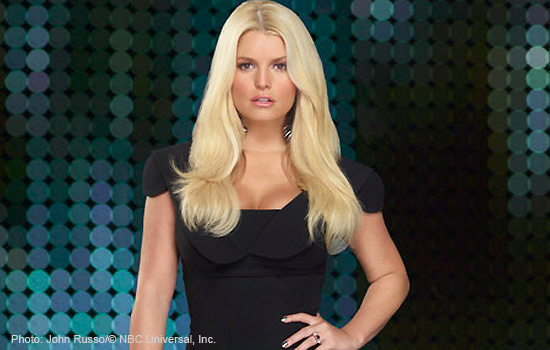 Successful singer and fashion designer of her own signature line, Jessica Simpson talked to press during a recent conference call about her work on upcoming NBC fashion competition show, “Fashion Star” as one of three mentors. Simpson was also joined by executive producer Ben Silverman.

Simpson gives advice and critiques to 14 up-and-coming fashion designers along with two other members on the mentoring panel, Nicole Richie and John Varvatos, with supermodel Elle MacPherson as show host and executive producer.

Simpson was able to draw a lot from her own fashion designing experience. She stated that the easiest part is also the “hardest part”. That is, “instead of putting your ego first, you put the buyer first. That’s a really important thing”. Simpson also said the she thinks the show will expose some designers that will be around for a long time.

Simpson had the chance to showcase her line of clothing in her first runway show which will air in the finale episode of “Fashion Star”. Nicole Richie and John Varvatos also got to show their spring lines in which HOLLYWOOD JUNKET was on the set to see in person.

During the conference call, Simpson said numerous times that she wasn’t pregnant during the taping of the show. However, she did appear to be uncomfortable in her clothing and chair on set and showed a noticeably widened waistline. 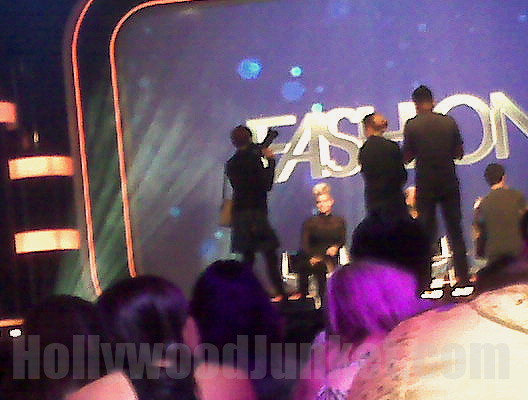 Jessica Simpson on the set of "Fashion Star". 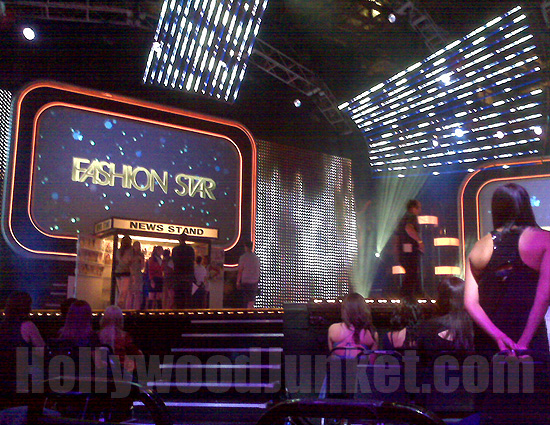 HOW FASHION STAR IS DIFFERENT FROM PROJECT RUNWAY:
Executive producer Ben Silverman said that “Fashion Star is really so unique and so distinct like no show that’s ever been on the air before. We are absolutely trying to build and create a real fashion icon and one that will have impact on the stores immediately”. Silverman also said that the fashions on the show are being designed with a consumer in mind and “not just in a vacuum”.

IT’S ALSO A GAME SHOW?
Silverman said that another element that make “Fashion Star” different is that there is actual game play. “These retailers are competing in a kind of game show environment to bid against each other to buy these fashions in real time. It’s unlike any other show you’ve ever seen”.

BUSINESS SIDE OF FASHION:
Simpson said that simplicity is one of the hardest things to do as a designer. “We really wanted every one to create closets for America more than anything”. She also explained that “It’s not just about being creative. It’s also about being business savvy. I originally thought I was just going to do shoes and handbags. With the success of that it just gave me more opportunities. Life is about expanding and that’s how you grow”.

INSPIRATION FROM THE DESIGNERS OF FASHION STAR:
Simpson said of two designers on the show, Lizzy and Lisa are two moms that quit their jobs at Micro Soft to pursue fashion in their basements. “They understood the everyday woman.” Simpson said that what inspired her the most with all of the contestants was their excitement. “It makes me want to go back to the beginning stages of excitement and flush of creativity.”. Simpson said through mentoring these designers, she was able to fabric shop for the first time which was also inspiring to her.

AT THE END OF THE DAY:
The not so fun part of being a mentor on “Fashion Star” – “There’s a lot of pressure on the mentors. You don’t want to tell someone to do the wrong thing. Because it’s on my shoulders if I tell them to do the wrong thing and they buyers don’t like it”.

Part of the job of the mentors is that they get the chance to save a designer if they don’t get a bid from a buyer and are at risk of getting voted off of the show. There will also be fashions on the show for men. Silverman said that many of the production staff were rooting for certain designers at times in order to be able to buy a particular piece!