HOLLYWOOD JUNKET recently got the chance to talk to stars of “Footloose” Julianne Hough and Kenny Wormald at a press conference in Beverly Hills, Ca. They give us the behind-the-scenes look into recreating the 1984 classic film “Footloose” this time directed by Craig Brewer. We also got back-stories to the movie from Brewer, and the rest of the cast.

When we talked to Brewer earlier in the day, he stated that it was important to him to keep the key elements and strong morals in this version. He stated that he remembered asking the studio if they were okay with showing scenes with pre-marital sex, domestic abuse, drug use and drinking. Their reaction- “what are you talking about?” It was all in the original, but what most people remember is the happy, bubble-gum dance movie said Brewer. The necessary changes were made to “Footloose” to bring it up to date, yet keeping a lot of the same script and even the same lines in some scenes. Brewer said he changed the storyline of Ren’s past in that his mother had passed, instead of divorced in the original, he had to restore his bug vehicle, and the “angry dance” which was performed in perfection by Kevin Bacon in the original, left Ren injured with many mishaps. All done for the reasons of he wanted to create more of a struggle for the character, and “divorce now a days is not that bad as it was in the 80s”. 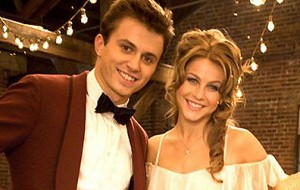 Wormald said wardrobe had a cameo in new "Footloose".

Actress Andie MacDowell also talked about her character, Vi Moore. She said that Brewer didn’t her to play the character the same way. Not as weak as in the original (played by Dianne Wiest), more colorful, and not as repressed. “A woman in this day in time even though she’s a preacher’s wife would still have a voice”, stated MacDowell. The actress also said that she had worked with co-star Dennis Quaid previously, so they had a history. MacDowell’s reaction to when she first heard of the remake of “Footloose” she thought “how fun!”. She also thought it was perfect timing. She said it is respectful of the original which helped by having the producers on the set.

Actor Miles Teller who played Ren’s best friend “Willard” said of the iconic montage scene with the song “Let’s Hear it for the Boy” in the background said that this compilation of dance numbers took “a good amount of days to film”. He said that the director shot each dance number three different times in three different phases: poor, intermediate, and advanced. Teller said that he practiced for the scene for one month. His love interest, Rusty, played by Ziah Colon said that she fibbed when auditioning for the role of “Rusty” about knowing how to dance. She said “yes” then later learned how to dance.

Listen to Julianne Hough and Kenny Wormald talk about their “Footloose” experience below: