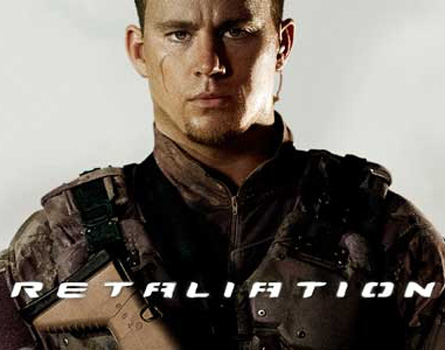 Audiences can be prepared to see a lot of action, a lot of muscles, and a lot of CGI special effects. Also seen in this updated version of heroic soldier, Joe Colton (played by Bruce Willis) is actor Channing Tatum who is on a current hot streak. His first major lead role in the film “21 Jump Street”, soon followed with another starring role in “Magic Mike”, and now summer anticipated blockbuster film, “G.I. Joe Retaliation”. Channing plays Captain Duke Hauser, opposite another well-known leading man, Dwayne Johnson (“The Rock”).

An attack results in the U.S. President (portrayed by Jonathan Pryce) to denounce the G.I. Joes, and put the Cobras into action. He declares the the new special forces unit, “code name Cobra” will protect the American people where the “G.I. Joes’ could not”. This catastrophe for the Joes’ calls for emergency help from the original Joe, Joe Colton (Bruce Willis). Together, the foursome, one female – Lady Jaye (Adrianne Palicki) included, set off to save the world.