Feeling Good Over You THE VOICE 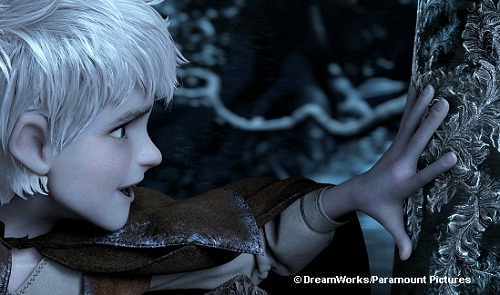 While you’re racing to the movies to take your kids to see the latest 3-D animated holiday film this year, you may soon realize Paramount Pictures “Rise of the Guardians”, directed by storyboard artist Peter Ramsey (Fight Club, Shark Tale, Monsters & Aliens’) could prove to be just as meaningful for adults as well.

“Rise of the Guardians” is a film based on William Joyce’s book series “The Guardians,” pertaining to the back story of how Santa, The Easter Bunny, The Sandman and The Tooth Fairy came to be.

Yes, Santa, The Easter Bunny, The Sandman and The Tooth Fairy are all “guardians” of the children of the world, seeking to bring them happiness and hope that their dreams will come true. And of course, the Bogeyman, named Pitch, is our resident villain. He is tired of kids not believing in him. So, he sets out to obliterate the Guardians to fill the world with nothing but darkness and fear so that kids will realize the Bogeyman is real after all.

Yet there is one new Guardian in the making. While most people may not have a strong sense of who Jack Frost is or what he looks like, that is precisely the point. Frost is portrayed as an adventurous teenage boy who is always running around in the snow playing with kids. Yet none of the kids can see him, nor know what he really looks like because he himself doesn’t know his own identity. After all, if he doesn’t know who he is, how can he expect anyone else to believe in him? “The Man on the Moon” (sort of the resident “god” of the Guardians), gives him the chance now to lead the Guardians in fighting off Pitch while finding himself along the way. 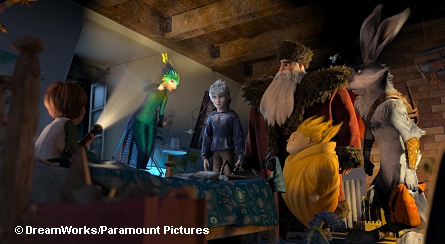 Once Jack Frost finds out his true core lies in a child’s greatest attribute — a feeling of FUN — he has a renewed sense of self. Frost and the rest of the Guardians as well as some representative kids, fight off the Bogeyman in an epic battle of good vs. evil. And in the end, we come to the conclusion that kids are not that naive at all. They know that both hope and fear exist in this world. Yet, they just need to stand up to the Bogeyman in order to overcome him. Instead of running away, they face their fears and their inner strength is what destroys the Bogeyman. 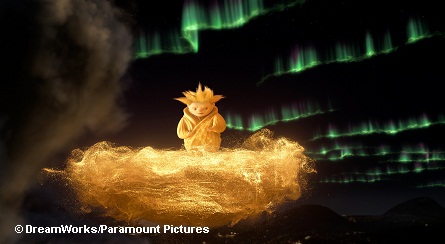 “Rise of the Guardians,” The Sandman

The film was visually beautiful. As a 3-D movie it was not overpowering with objects jumping out, but done tastefully and artistically. And, as always with an animated film, the voice over talent is filled with a star-studded cast, including Alec Baldwin (as “North”), Jude Law (as “Pitch”), Hugh Jackman (as “E. Aster Bunnymund) and Isla Fisher (as “Tooth”), and of course Chris Pine as Jack Frost. Each actor seemed perfectly suited for their roles and delivered fantastic performances, even adapting accents or losing accents, as it may have required!

“Rise of the Guardians” is more than just a story of good versus evil, but one’s inner strength versus the outside forces of this world. Everyone, both young and old can appreciate this lesson. If we just have enough belief in ourselves and the good within us, we can overcome all. Nothing, not even the Bogeyman can get us down.