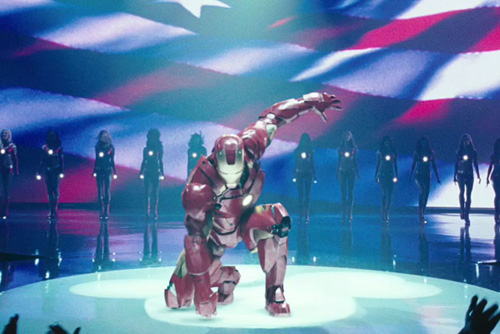 IRON MAN 2 is best described as high-tech, high-octane, and high-testosterone! Keeping with traditional AC/DC opening musical anthem, Anthony (Tony) Stark celebrates the accomplishments the metal suit has provided him in his ongoing quest to keep the United States safe by putting on his own show “Stark Expo” involving lots of fireworks and lots of women. No celebration is without a whole lot of interference from the U.S. Senate hearings who want to confiscate Stark’s armored suit for fear of public endangerment, and pesky Marvel Comics villains

When you have a powerful, profitable, and patented technology, everyone who can feasibly obtain it, is out to do so. This is the daily life of Stark in IRON MAN 2. Russian Nemesis and scientist Dr. Anton Vanko’s son, Ivan Vanko (Mickey Rourke), a physicist, makes it his mission in the film to kill Stark then bask in his own scientific success. His efforts are accessorized by competing industrialist Justin Hammer (Sam Rockwell) who has his own agenda against Stark.

IMAX delivers the clearest and most immersive picture quality to fully appreciate the explosion scenes, high-tech equipment, holograms, and fighting scenes. If you’re a fan of video games, any number of the brilliant actors in the film, or of course, Marvel Comics, this film is a must see!