LOOPER: A Twist In Time Will Cost You Your Future!

Kirstie Alley talks about DANCING WITH THE STARS

LOOPER: A Twist In Time Will Cost You Your Future! 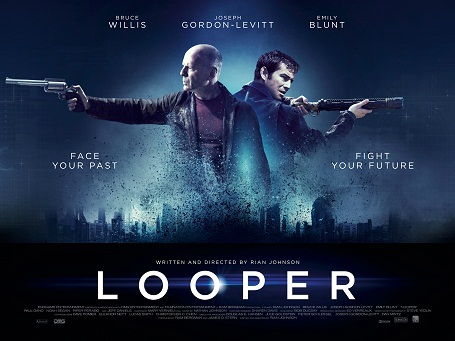 “Looper”, written and directed by Rian Johnson is a theoretical view on time travel with an unusual purpose. The future is ruled by an evil force called “The Rainmaker” who heads a mob-like group of killers. However, they aren’t doing the actual killing. When they want to “bump” somebody-off, they send them 30 years back in time to the year 2044 which is where the story begins in Kansas. The hit-men from the past doing the killings are called “loopers”. 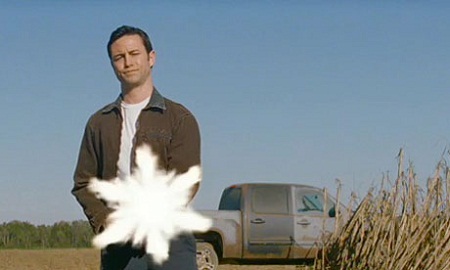 Joseph Gordon-Levitt as “Joe” in LOOPER

The film revolves around Looper “Joe”, played by Joseph Gordon-Levitt. A self-centered, wealthy young thirty-something whose wealth was created from his looping and who finds comfort in liquid drugs dropped into his eyes and a prostitute named “Suzie” (Piper Perabo) until he discovers more in life outside of his daily grind after coming into contact with his older self, played by Bruce Willis and finding the woman who “saves his life”, “Sara” (Emily Blunt). 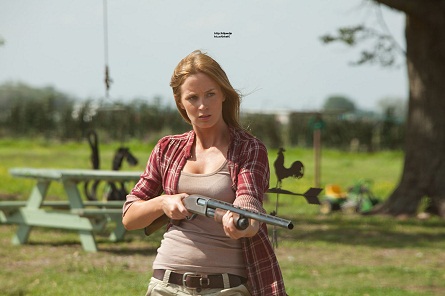 Loopers receive their jobs at an exact, sometimes approximate time in a specific secluded location where the person being killed is a man that is bound, hooded, and gauged. As soon as they appear out of thin air, the Looper shoots them dead, then turns their body over to receive their pay-out which is bars of silver tied to the victim’s back. 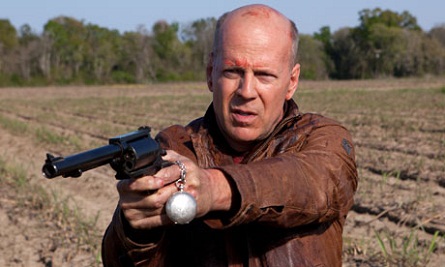 Ultimately, every “looper” has his day, so-to-speak. When their bosses want to finish the jobs, they must do this be eliminating all evidence of the killings – which by-the-way are technically killings of people that don’t currently exist since they were knocked-off 30 years ago. But, they do this by sending the Looper himself (if he’s still alive) from 30 years into the future back in time to be killed by themselves. Once the looper assassinates himself, the reward is a huge payout with gold bars. They then have 30 years to live. 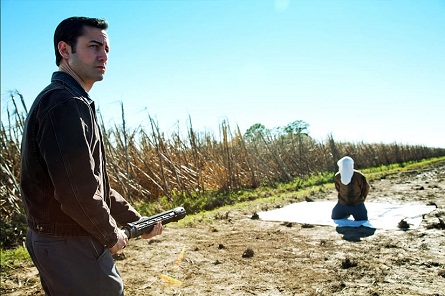 When Joe’s friend Seth (Paul Dano) is faced with himself to kill, he can’t do it and lets his target run free. A man from the future roaming free is a huge, catastrophe no, no. But, Seth tells Joe of a futuristic event that his future self told him about that is taking place where an evil power called “The Rainmaker” is causing havoc and ruin. After also being faced with himself from the future via an un-hooded delivery, Joe lets his older self get away. Once catching up to him, he also tells Joe about “The Rainmaker.” Older Joe is set on killing The Rainmaker as a child in order to prevent his future domination. Joe is in a panic run and need to make things right with his bosses. However, his life is complicated when he meets Sara and her son who may potentially be the Rainmaker and turns his focus on protecting them.

“Looper” is a refreshing and engaging time-travel story which ultimately behind all of the killings, and violence is a love story of the two Joe’s and how each one finds the love of his life at both spectrum’s of time.