HOLLYWOOD JUNKET host, Charity, reported earlier on her live experience on the set of the DEAL OR NO DEAL Christmas show. One of the prizes won on the game show, was an invitation to the red carpet premiere of a holiday film, “Marley & Me”. Here’s her report on the premiere. Her review of the movie follows.

I just loved walking through the crowded streets of Westwood Village to go see the premiere of “Marley and Me”. Bright lights and hoards of people anxiously awaiting for all the stars to walk the red carpet. I know the stars of the film, Owen Wilson and Jennifer Aniston would make the crowd go wild, but unfortunately I missed it because I wanted to get into the theater to get a great seat. 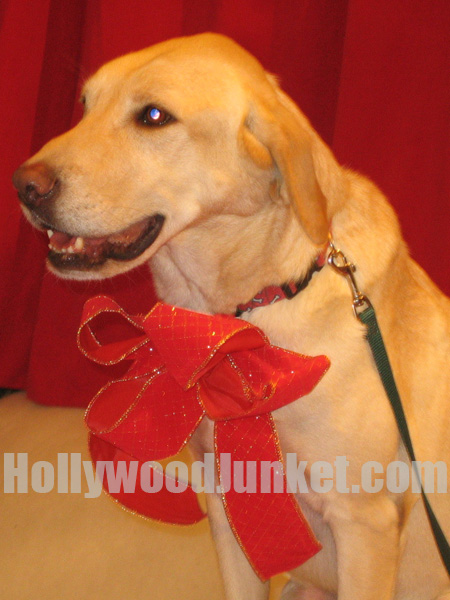 On my way into the theater, my friends and I saw the dog that played “Marley”, on a box next to a Christmas tree set-up for people to pose for pictures with him! My friend and I took a picture with Marley. Marley licked my friend’s face so much that it turned my friend on! That was funny! I couldn’t stop laughing at the photo.

The dog at the premiere was just one of the seven in the film portraying “Marley”. My friend said he appeared to be the “medium” sized one.

Get this folks, a movie screening with FREE popcorn, soda, and candy! YES! A great added bonus! Upon entrance into the screening, theater workers and security were compensating peoples’ cell phones and cameras. No movie piracy here! Not that I would try.

While waiting inside of the theater for the film to start, a sideshow of all of the photos attendees took with “Marley” was played onto the theater screen. Of course, I saw the picture of me laughing with my friend being licked by the dog. I munched away on my snacks and I had an emotional experience with the movie! I cried so hard! I would definitely take home “Marley”. “Thank you!” to DEAL OR NO DEAL for this wonderful experience!

FILM REVIEW OF MARLEY & ME:

I thought “Marley & Me” was such a cute film. This film will make you love dogs even if you may not be a dog lover.

It’s a great story of a young newlywed couple, played by Owen Wilson and Jennifer Aniston who end up owning such a cute puppy they name “Marley”. The movie shows how the young couple and Marley grow up to inspire each other and see how their personal development changes through time.

I grew so attached to Marley in the movie that I didn’t want to leave the theater. I left the movie feeling teary eyed. Owen and Jennifer did a great performance as wells as the dog that played
“Marley”. Just a side note, Eric Dane, “McSteamy” from “Grey’s Anatonmy” is also in the film.

This is a wonderful family film. One thing thought that was expressed by my friend who also attended the movie premiere, the ads of the film being a “Christmas” movie are misleading. Only one scene in the movie with a tree and some lights in the background.