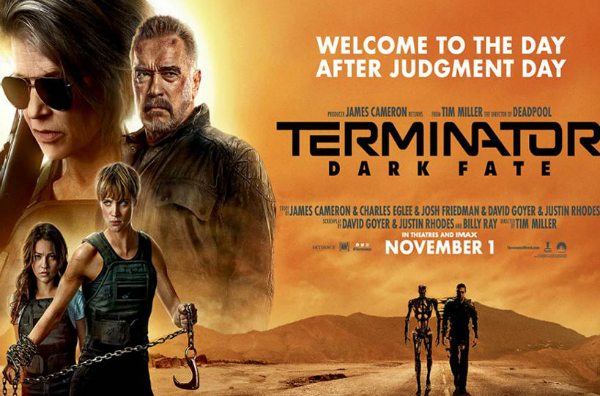 The opening of “Terminator: Dark Fate,” directed by Tim Miller, opens with a scene from ‘Judgement Day where Sarah Connor (played by Linda Hamilton) is forewarning about a dark future where no one survives while locked-up in a mental ward.

Fast forward to two years later after Sarah and her son save 3 billion lives after deterring and killing a time traveling robot called the Terminator.  A bug in the computer system causes for a tragic loss for Sarah.  Next, flash to the current time places the new target in New Mexico.  This time, its a future leader that is sought to be terminated.  We soon discover that Sarah, even after being a wanted outlaw in 50 states, is still chasing these Terminators sent from a slightly varied future to protect and preserve the human race.

Just in the first two Terminator movies, a protector for the target is sent at almost the same time that a Terminator is sent.  This time the protector is a female human, Grace (Mackenzie Davis) who during a battle was made into a sort of hybrid human/robot.  Unfortunately, this puts her at a bit of a disadvantage when the inferiority of her body causes for slow-downs in her endurance level.  Why would the future leader send such a protector?  It’s eventually explained in the latter half of the movie.  While the new Terminator, called a Rev-9 (Gabriel Luna) is carefully planted to blend-in with the locals, there’s nothing exceptionally notable about this character.  While past Terminators had stand-out features, the first being an impressive build, a distinct accent, mannerisms, and a steel inner skeleton in actor Arnold Schwarzenegger.  The second Terminator, T-1000 (portrayed by Robert Patrick) displayed an evil presence, distinctive edgy features and an enhanced ability to turn into liquid metal. The current Terminator doesn’t display any exceptional upgrades.  It’s more like the features from the first two have been combined to create this new model that is equipped with any one stellar “wow” effect ability.

Past Terminator (played by Arnold Schwarzenegger) re-enters the picture, this time as an ally.  He seems to switch back-and-forth from bad, to good pretty consistently throughout all three movies.  The ‘Dark Fate  writers want audiences to believe that this robot was able to live out life disguised as a human, even creating a family for himself. And, they don’t know he’s a robot?  Clearly, something must be wrong with them.

A good portion of the movie had slower moments that made the effort to establish human connections. It makes sense that ‘Dark Fate would take a part of ‘Judgement Day to expand upon. That is when a young John Connor tried to train the Terminator about different human emotions. However, ‘Judgement Day had a better balance of action vs. human relations that made it a more enjoyable, well-rounded action film than ‘Dark Fate.

Dark Fate’s ending keeps in the tradition of the first two Terminator films finale scenes where an ultimate battle occurs in a factory, leading to the same fate of the Terminator as those previous movies.

In the closing scene, it can be assumed that a new “Sarah Connor” will take-over, and the actual Sarah Connor takes her under her wing where some intense training is sure to follow.  Hence, creating a new slew of follow-up films.