DEAL OR NO DEAL: Model Claudia Jordan Gossips with THE GOSSIP QUEENS! 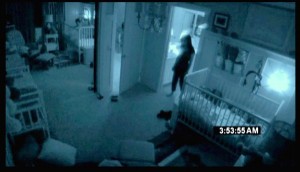 “Paranormal Activity 2” is a prequel to the first film. Katie and Micah, the young couple who were terrorized by a demon in the first one, are interwoven into this storyline. More explanations are revealed to exactly why and how the demon was focused-in on Katie.

In “Paranormal Activity 2” it is Katie’s sister and her family who are the targets. Security cameras throughout their home’s interior and exterior give a new point-of-view for the storytelling along with a hand-held camera operated by the father and daughter.

Video interviews of fans waiting to see “Paranormal Activity 2” below:

Their story begins on August 7th, 2006, in Carlsbad, Ca, about one hour from Katie and Micah’s location in San Diego. The film starts much like the first one, from a camera’s P.O.V. The family welcomes the arrival of a newborn baby. This prequel documents the 60 days before the death of Micah in part one. The story ends on October 8th 2006, one day after his death.

Although this movie delivers a storyline to support the first film, it also opens up a whole lot of possibilities for at least two sequels, one picking up where the first one left off, and the other going farther and developing the story behind the demon’s intentions for tormenting the family.

Unfortunately “Paranormal Activity 2” did not provide any new and challenging ways to stir up a fright out of audiences, instead it relied on the safe bets, using the same techniques from the first one. Go see this movie for the plot-line filler. Don’t go see this movie if you want to get scared. Instead, watch the first one again.