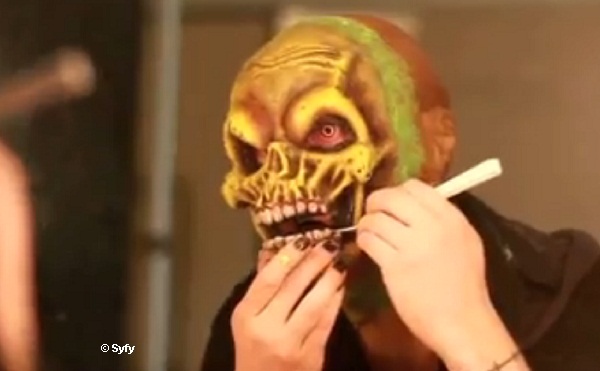 Syfy network introduces the new slew of up-and-coming VFX makeup artists working on your future favorite horror and fantasy films coming soon! The fourteen contestants competing in season four of “Face Off” talk about what sets them apart, their life goals, and life experiences in their audition tapes below. This season’s contestants range from the super-talented and experienced to the very green and newbies, some fresh out of school!

Alam Park – Originally from South Korea, she came to America at the age of fourteen. She’s new to the craft and just of Makeup Artistry school. “I know I can survive no matter what it takes,” she says and thinks that “Face Off” will be a good experience for her since she is new and wants to learn more than what she learned in school.

Michael Faust – Says he’s been called everything from a jerk to the c-word. He has a background in make-up that started when he was a kid. Horror movies that inspired him include: Creep Show, and Poltergeist.

Alexandra McCoy- Born in Fairfax Virgina Mostly raised in Munich, Germany. She is Russian. Says she speaks fluent German and English. Says she got into make up from being an actress and was inspired by an FX artist on the set of a re-enactment crime series.

David Greathouse – Says “you haven’t seen anything like me before.” He says he’s been “obsessed with fantastic creatures” since the age of three and still is. He is also a performer, or actor as well which he thinks gives him an advantage over other artists he says because he knows what actors are going through while wearing the make up.

Meagan Hester – She works with a group of artists in New York all the time. She says that being a Libra sign allows her to be honest. In high school she says she was very athletic, a good partier, and a bully. Describes herself as “fun, crazy”.

Eric Fox – is a tru believer in things happening for a reason, and says he is not a quitter. Born in Georgia and says he was the creepy, Gothic kid in high school. His wife and kids are very supportive and his kid calls his shop the “monster shop.” He does this VFX work out of “pure passion.”

Wayne Anderson – He started in 2005 with a haunted house. The following year he won a costume contest. From there on, he’s won numerous of costume contests. His five year goal is one in which he plans to have his own shop and working in the union. Rick Baker is one of his idols and says he’d like to be one of the top VFX artists in Hollywood.

Troy Rivers – “I’m 6’4″, 290 lbs. I’m a big guy. You don’t tend to see a guy that looks like me doing your make up. When I first started doing beauty makeup, my brother was tripping and making fun of me. It was all jokes and games.” He says he’s always been artistic and has always been fascinated by Sci-Fi movies and being inspired by “how did they do that.” He found the VFX field to be a way for him to use his technical skills and his artistic skills. “I try to be the best I can at all levels of makeup.” Rivers also says he does body-painting and taught himself how to sculpt. He said that where he’s from, there is no school for special effects. He likes the unpredictability of film sets and that you never know what to expect.

Autumn Cook – “If you want something done right, do it yourself,” she boasted. Cook worked on making teeth under pulled muscles – a makeup that a former contestant couldn’t do. Her goal was to use this makeup to get onto “Face Off” this season. She says she was inspired by the show “MacGyver” in order to pull it off. She’s been doing a lot of hard-core gore she says. “But the stuff that I’m doing, I couldn’t show my child or my Mother” she says which is part of the reason she wanted to get onto “Face Off.”

J Anthony Kosar – “Since I can remember, I’ve always been involved in the arts. I’m primarily a self-taught effects artist.” He says he was always disappointed by the costumes he found at the store for Halloween and tried doing it himself at age sixteen. He does VFX makeup for theater, film , and commercials locally in Chicago. He teaches effects projects in his spare time from his commercial space.

Jenna Green – Describes herself as “a pretty darn cool chick” . Says she has a lot of interesting things about her. She is currently a single mother of age seventeen and nine year old sons. She was diagnosed with ovarian cancer in 2008 and in the same day her husband told her he was leaving her for another woman. Also in the same day, she was laid-off from work. She was inspired to push forward due to her ex-husband’s not believing in her.

Eric Zapata – Says he going into special effects makeup late in life. He did not like monsters when he was a kid. Says he got into the cult horror makeup special effects films like “Tomb Raider 2” and “Evil Dead” not until he was in college. Says he respects the industry and is a fan of it. Hyper realistic old-age makeup is his passion. Says he wants to be more known for his technical skills.

Katie Machaiek – Says she auditioned last year and got really close. She decided to come back and give it another try. She works in an office doing computer work. While she was working, she watched “Face Off” on television. Her experiences includes doing makeup on “Grinchmas” at Universal Studios. Says she was inspired by her father’s paintings. Her father passed away before seeing her VFX work and she mow wears his class ring for luck.

Krisitian Kobzina – Started when he was seven. Before he got into special effects he wanted to be a comic book artist. He’s been free-lancing since 2005 because he wasn’t getting enough makeup work at the shop. He has a two year old daughter who seems like she is following in his footsteps. She requested a make up kit for Christmas.