STARS EARN STRIPES: Celebrity Contestants – Some May Be In Trouble!

STARS EARN STRIPES: Celebrity Contestants – Some May Be In Trouble! 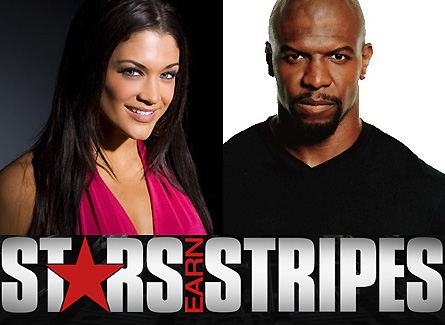 NBC is bringing a new celebrity reality show to their prime time television schedule this August. A list of the celebrity contestants was released by the network today. One of the celebrities includes an actor that played Superman! 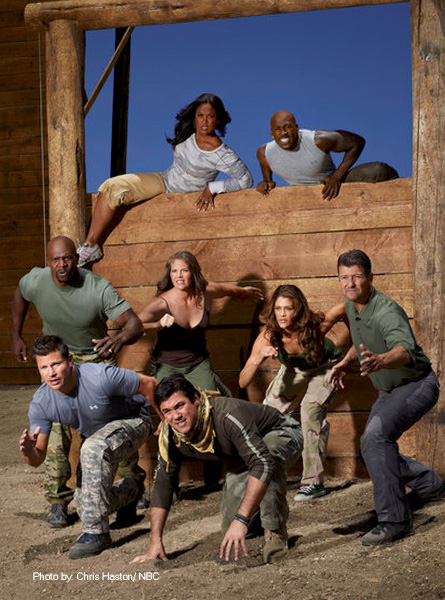 Most of the celebrity cast is physically fit. The series is said to honor America’s armed-forces, or maybe better described as a propaganda show. Whatever the case may be, the list of celebrities is: four-time undefeated world boxing champion and daughter of a former heavyweight champion Muhammad Ali, Laila Ali (American Gladiators), actor and a former football player (we learned this while on the set of “The Choice“) Dean Cain (Lois & Clark), actor and former NFL player Terry Crews (The Expendables 2, The Newsroom), multi-platinum recording artist, actor, producer and host of “The Sing Off“, Nick Lachey (98 Degrees), Alaska businessman and husband of former Alaska Governor Sarah Palin, Todd Palin, Olympic gold medalist Picabo Street, professional trainer Dolvett Quince (The Biggest Loser), and WWE wrestler Eve Torres.

Hosted by General Wesley Clark (ret.) who is a former Supreme Allied Commander Europe for NATO and former presidential candidate- and host of “Dancing with the Stars” Samantha Harris. “Stars Earn Stripes” will debut with a special two-hour episode on Monday, August 13 (8-10 pm ET). After that, the show will air on Mondays at 9 pm ET.

There’s also an all-star producing team behind this show that knows a lot about physical competitions and drama! They include Dick Wolf (“Law & Order”, “Law & Order: SVU”), Mark Burnett (“The Voice“, “Survivor”, “The Celebrity Apprentice“), and David A. Hurwitz (“Fear Factor“). The show’s crew consists of recent military veterans. This sounds like a smart strategy that will hopefully pay off in the creation of realism in the military exercises that the celebrity contestants will be forced to perform while competing on the show.

The challenges that this group of celebrities will be faced with on the show are all said to be “difficult missions that are inspired by real military exercises”. With the help of an “operative” who is a current or former member of the armed forces or law enforcement agencies, that each celebrity is paired with – together they must complete their given challenges whether it be dropping out of a helicopter or long range weapons fire. All celebrities competing are playing for a cash prize for various charities that are military, veterans, and first-responder based. As with all competition reality shows, someone will be eliminated. On this show, it’s the team!

Two of the celebrities that I personally worry about in these challenges are Dean Cain and Nick Lachey. It’s very apparent that for the most part, the rest of the players are very physically fit and should be able to handle the demanding physical tasks. However, after watching Dean Cain in-person on “The Choice”, he seems like quiet the diva. Cain refused to give-up his chair for the young lady that he had selected for his date. When the other male contestants on the show tried to sway him to give his girl his chair, Cain said that she needed to know who the king of the castle was! To me, this screams a red flag that he is someone who may not be up for the tough challenges on “Stars Earn Stripes” not because he physically can’t do them, but because his pride won’t allow him to. The other contender that I have reservations about is Nick Lachey whose style appears to be metro-sexual, or very well-groomed and is not the guy who will change a flat tire or crawl under the sink to fix a pipe. Although physically fit, Lachey doesn’t appear to be the kind of physically fit that is on the same level as someone like Dolvett Quince or even “The Rock” Dwayne Johnson. He also may very well be that guy who isn’t going to be the first one to jump out of a helicopter. Lastly, another questionable competitor that I’m adding-on to this list is Todd Palin mostly due to his older age over the group of younger contestants.