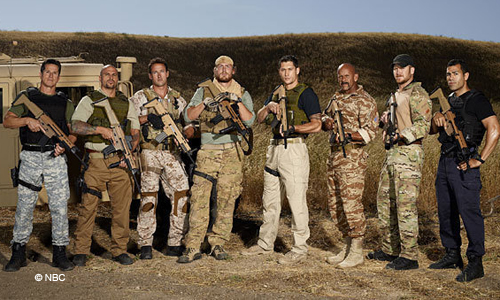 The real stars of “Stars Earn Stripes” can be said to be the operatives who are paired-up with the celebrities whom are sharing just a small part of their daily work lives along with all of the other men and women out there that are serving, have served and law enforcement officers as well as emergency first responders.  NBC recently held an interview with the following Operatives on the show: J.W. Cortes (U.S. Marines Corps), Brent Gleeson (former U.S. Navy SEAL), Tom Stroup (Orange County Sheriff’s Department and SWAT Commander), and Talon Smith (U.S. Navy Corpsman).

After being part of the show, Tom Stroup said he realized that “a lot more people care about the sacrifices to keep this country free. I got so many emails from people. What I realized is it’s not just a show. It potentially can change people’s lives.” Stroup also said he thinks that “Stars Earn Stripes” is “a lot bigger and a lot more important than I thought it would be”. 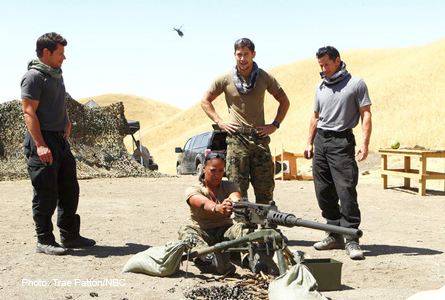 J.W. Cortes said that the cool thing about the show is that all walks of life are represented. “Even the celebrities are all diverse” he said.

Doing it for Charity:
When asked how the charities for “Stars Earn Stripes” were selected, Brent Gleeson said that the charities were pre-selected by the NBC network. He stated that the celebrities chose from that group of charities and it’s how the Operatives were placed with their celebrity partners. Gleeson said, “the military is a great incubator for a career when you get out,” but is something that is not communicated well to the youth when recruiters are trying to sign them up. 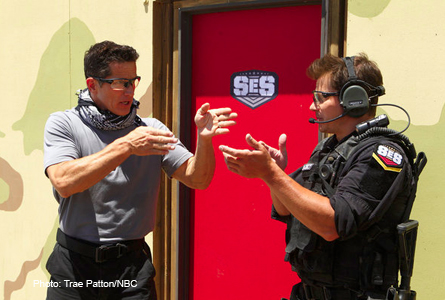 Does  the show Glorify War?
When they were asked what they thought about the show receiving criticism for glorifying the war, Gleeson responded, “All of the operatives on the show are decorated and seasoned soldiers. None of us would glorify war. It is what it is. To show how difficult our jobs are. People who say that, have never served, don’t know what it is like to sacrifice for our country, or to be shot or have a friend die.”

Stroup responded, “Unfortunately, what I think has happened whether it’s a war in Iraq or a war in Vietnam it’s always about the soldiers. There are a lot of things that we may be asked to do and feel uncomfortable but we do it to save someone else. Sounds like someone is picking and choosing what wars they approve of and disprove. We live in a free country because we defend our rights. The message of the show is reminding the public that we put our lives in danger” 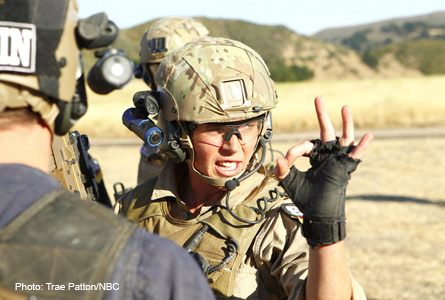 J.W Cortes said, he returned to his home in New York from the war in Iraq and didn’t have a job. “There are things going on to these young men and women that go unspoken of. It’s hard to describe that feeling of being part of something great. When you leave the service, you have the feeling of not sure where to go. We loose soldiers every day to suicide. Stars Earn Stripes in my opinion is on the right path.” He said that he thinks the show is “on to something much bigger than any one of us” and it’s not glamorized he said.

How Does the Show Help Promote the Hiring of  Veterans?
Cortes said, “it’s showcased the amazing skill-set that are given to people in the military. There are things that are embedded in you that make you an invaluable commodity. There’s a certain level of confidence in the air to them. A can-do attitude.”

Stroup said “when you live something genuine, people spot it and want it,” such as the two baristas he said he met at a Starbucks recently who have been inspired to join the Police Academy after meeting him.

Gleeson said one of the charities is the Chamber of Commence for hiring Veterans. “Clearly the show is promoting how we as a country are coming together and helping them find careers after the military. When you just get out and you’re trying to find which way to go, we can help with that.”

Talon pointed out that the production of “Stars Earn Stripe” hired all crew members who are veterans. “I can not tell you how many times I talked to someone on set who also served.”

As for the celebrities, they will all readily admit, said Gleeson, “It’s an opportunity to find out how hard it really is” – Terry Crews. That was just a taste of it. This is not near the sacrifice they actually make. 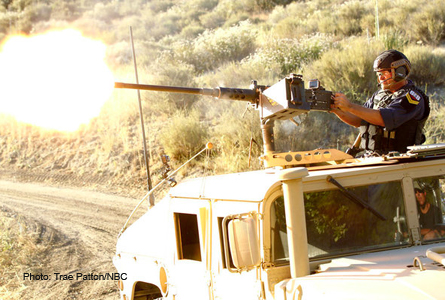 One of the Operatives stated that most of the celebrities are coming from a pretty fit lifestyle, and that some are MORE in shape than the Operatives on the show. Before each mission their training for each mission would range from 2-3 hours depending on how many activities they would be undertaking in the mission.

Stroup said, “the only man that can walk on water is Todd Palin. I hit that mud and stuck. It felt like someone was dragging me down. Nick [Lachey] felt the same way. Nick matched me the same way. Neither one of us wanted to stop. Nick was in fantastic shape. I’m very impressed with his fitness level.”

Cortes said he was disappointed because he had to “step-up” his game. “I looked around for Todd, the next thing you know, I see him in the mud ahead of me. Exceptional shape across the board.”

Taylon said that Laila Ali is in such great shape that he didn’t want to say or do anything wrong for fear of her hitting him!

Are People Seeing the Military in an Accurate Light?

Cortes responded, “I don’t know how much more realistic we can make a television program without making it unwatchable for our families. This is a miniscule of what we’re doing. There’s no way are we saying this is the real deal. That would be a mockery.”

Gleeson’s reply was, “one of the things that makes it different being in the military or law enforcement is that the families don’t know that side of us. It’s a different person that has to come out. Nor do they see how hard the training is. There’s no connection for emergency responders or military with their family. One positive thing is it gives a glimpse of what the training is like. It’s us trying to honor our service men and women and first responders and help raise money.”

Taylon reinforced Gleeson’s statement by adding that the audience really saw one of the contestant’s on the show almost drown. “There’s a real aspect to what we do. But it’s a really small taste of it”

For Cortes, the hardest part about being deployed for him was kissing his Mom and Dad goodbye who were crying like children because they didn’t know if they were going to see him again.

What Was the Motivation for Working with Untrained Celebs? What Impact will it Have?

Taylon said that the motivation was to give back to the charities. “It’s for those who were wounded or killed in service. We still have people overseas who are affected.”

Stroup said, “We all went there with a little bit of trepidation. There was a lot of pressure at first. Then Mark Burnett walked into the tent. He said, ‘I want to assure you that our only purpose here is to raise awareness and to honor the men and women of law enforcement and military.'” Also, he said, to make “good TV.”

Cortes said he thinks that people who may not be born with the physical attributes required of special services and not sure that they can serve, will see the show and average looking guys with amazing skill sets. They may be inspired to serve their communities in other ways.