ARACHNOQUAKE: Spiders Unearthed on Syfy Cause Havoc in the Streets! 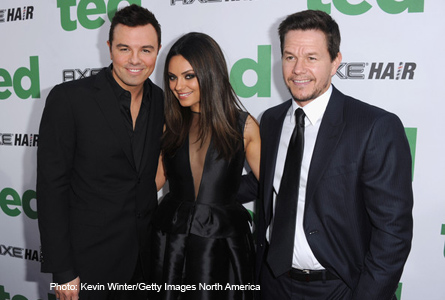 Seth MacFarlane, best known as the creator behind cartoons “Family Guy”, and “American Dad!” will also have a movie coming out next Friday called “Ted”, with similar characters only they are real-life.

The actors that make-up the story-line involving a walking, and talking stuffed teddy bear all came-out to Hollywood Blvd. to attend the film’s world premiere on the red carpet. In attendance were Mark Wahlberg who plays the main character, Johh Bennett, Mila Kunis whose role in the film is John’s girlfriend Lori Collins. Also on the red carpet were co-stars Patrick Warburton, Jessica Barth, and Sam J. Jones who revives his Flash Gordon character in the film. The only one missing was Ted the bear himself!

The cast of “Ted” includes: Mark Wahlberg (as John Bennett), Seth MacFarlane (as the voice of Ted), Mila Kunis (as Lori Collins), Joel McHale (as Rex), Giovanni Ribisi (as Donny), Patrick Warburton (as Guy), Matt Walsh (as Thomas), Jessica Barth (as Tami-Lynn), Aedin Mincks (as Robert), Bill Smitrovich (as Frank), Bretton Manley (as Young John), Patrick Stewart (as Narrator), Norah Jones (as herself), Sam J. Jones (as himself), and Tom Skerritt (as himself).