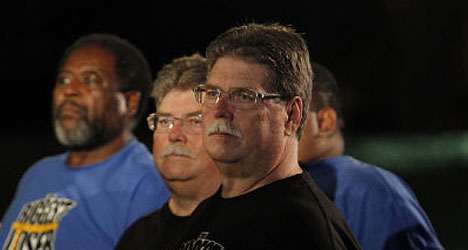 This week’s episode of “The Biggest Loser” revealed a weigh-in surprise for the second week in a row. Contestant, Don Evans gained six pounds for the second consecutive week, along with his new partner, Irene making him one of the two contestants sent home. The other one, Larialmy Allen.

In a phone conference call this morning, Evans stated that Irene had already put the plan in-motion to put the weight-on in her attempt to get him voted out. His previous week’s shocking weight-gain along with Irene’s added pounds this week, he says he felt like the game was over and that it was too much to make-up. “There was no options. That’s the way it was”, said Evans.

As to how he gained the weight – Evans credits drinking too much. “The Biggest Loser” ranch proved to be too much for Evans, and just enough for Larialmy Allen’s husband which was why she volunteered to also go home. These two contestants have some advice for people who are thinking about trying-out to compete on “The Biggest Loser”.

Click the video below to hear Larialmy and Don’s responses:

Allen stated that her advice to people who are trying-out for “The Biggest Loser” is to not wait for the casting-call to start the weight-loss process. She said that “if you start yourself, it improves your chances of getting on the show”. Evans also agreed.

Life after the ranch is not a solo journey. Both Evans and Allen said that they continue to receive support from producers, trainers and doctors from “The Biggest Loser” via weekly conference calls and text messages. The show sets them up with the local gym and personal trainers of their choice.

Evans stated, “Just because you’re eliminated from the show itself, that you are not abandoned”.