TRANSFORMERS: Dark of the Moon-3D with James Cameron! 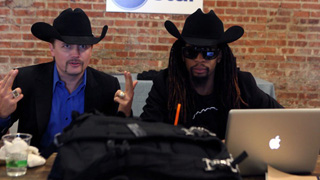 The two finalists, John Rich and Marlee Matlin, to this season’s “The Celebrity Apprentice” described the show as a “mental survivor”, and “Survivor for the city New York” in describing the grueling 17-19 hour long shoot days of the show by the same producer, Mark Burnett.

Producers were said to “keep you in a state of fatigue” by John Rich. “I had to power through the exhaustion” stated Rich. He also credited his high level of endurance to his concert tours.

Matlin said that for her, getting through the strenuous journey “it was all about my charity and Red Bull”. 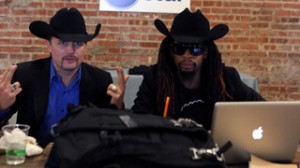 As for their final task – the “7Up” 1970’s vs. 1980’s themes, they both strategically picked their team members. Matlin said that she chose to play to her strength which was 70s decade rather than giving it to her competitor who is younger. Her team consists of Meatloaf, Matlin described as a “70’s icon”; Richard Hatch who is older and understands the 70’s; and LaToya whom was the last pick. But, Matlin says by her being a Jackson, she knows about the 70s’.

Rich stated that he had a different strategy. He was more focused on the “7Up” beverage itself, and selected his friend prior to the show, Lil Jon who he said, is the only person there to successfully market beverages. Other choices were Mark McGrath who “is like a popcorn machine” stated Rich because he has a lot of ideas and a lot of energy, and Star Jones whom he believes to be a good alliance and an effective team player.

Other players this season that were tougher to work-with according to Rich and Matlin were: Gary Busey, Meat Loaf, Nene Leakes, and Star Jones. Rich stated that Busey was like a tornado and the key to managing him successfully was to give him something that he excelled at. Matlin cited the Nene and Star drama as something that “got too old too quick”, and that she was able to focus-on and accomplish her tasks anyway.

Fans of the show and of Lil Jon and John Rich can expect to see a collaboration between the two on John Rich’s new album called “Rich Rocks”. Rich stated “cowboys and rappers can get along and raise money for charity”.

The finale of “The Celebrity Apprentice” airs Sunday, May 22nd on NBC. Matlin will be playing for her charity “The Starkey Hearing Foundation”, and Rich will be competing for “St. Jude’s Children Research Hospital”.