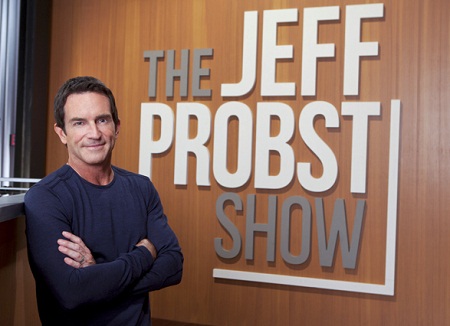 Jeff entered the room with a smile upon his face as audience members cheered. The set is quite casual; it consists of a sofa, a love chair and a living room table. Jeff sat in the love chair located on the right side of the stage and said his introduction. This show, “Unconventional Stars” revolved around non contemporary stars; the first guest was Melanie Lynskey (Two and a Half Men), her most notable role was in the film “Heavenly Creatures,” which also starred Kate Winslet. Melanie entered the stage; she appeared humble, warm-hearted and possessed a girl next door look. She sat down to discuss her career with Jeff, along with the hardships she had to face in the industry. 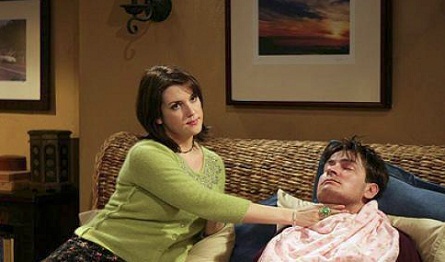 Melanie Lynskey in “Two and a Half Men”.

When she was in “Heavenly Creatures”, she was sixteen years of age; she said industry professionals attacked her weight. She said she was a very insecure teenager and did not believe she deserved to be in the industry she was currently in. She claims she did not feel pretty enough and tried to “fit in this box”, that was already filled. On the set of “Heavenly Creatures” she met the young Kate Winslet who is someone she described as extremely confident, experienced and talented. Lynskey told Jeff that she knew Kate was going to be a huge star. She also discussed how she worked with George Clooney in the Disney film, “Up In The Air”. He was amazing to work with she exclaimed, very down to earth, he does not wear any makeup in his films nor does he have an entourage. 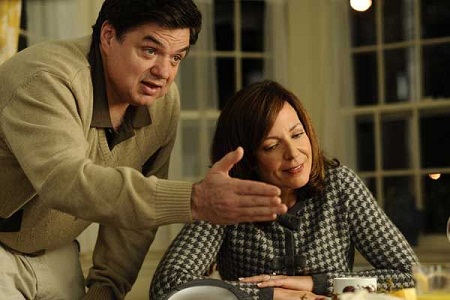 Oliver Platt in “The Oranges”.

Jeff’s next guest was actor, Oliver Platt from “The Oranges”, a romantic comedy that will was released on October 5, 2012. Oliver had quite the personality. He was both comical and charming. Jeff asked him questions about marriage and parenthood. He told him you know you cannot control anyone once you have a child. You have to understand the concept of discipline. He has maintained a happy marriage due to communication and a two week rule – he cannot be separated from his wife for more than two weeks.

At the end of the show, Jeff did his “guys on the couch” segment in which he brings down a guy from the audience to sit next to his male guest and they answer questions. One young man stood up and asked how do you approach attractive women? Oliver said he was horrible at talking to women but if you see a girl on her cell phone make believe you have the same one in order to strike up a conversation. The guy Jeff pulled from the audience explained that is wrong, just be honest with the girl and do not fear rejection. He said 99 out of 100 times you are going to get rejected. Jeff pulled a few young girls from the audience along with crew members to have the young guy practice talking to girls. It was entertaining to watch. Audience members seemed to enjoy it. It was interesting to see how difficult it is for men to approach women and how much they fear rejection. 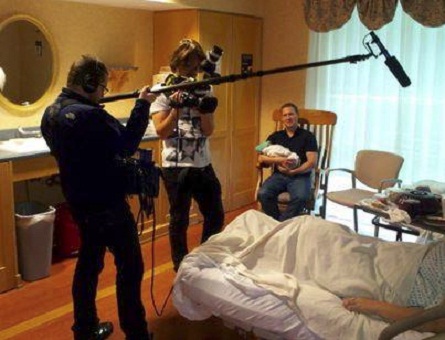 The next episode was about “The Baby Wait”, a show that is going to premiere on October 30, on Logotv. Genavieve Diggs was your ordinary sixteen year old girl, until she discovered she was pregnant. Faced with a very adult decision, the teenager decided to give the child up for adoption because she did not have the financial means to support it and she had ended her relationship with the father. She began searching for people that are interested in adopting. She ended up finding Mark Krueger and Paul Siebold, a homosexual couple. She believed they were the perfect fit; they were in love, financially secure and could give the baby a great life. The show is going to revolve around the birth and the emotional process of giving up your child.

Jeff Probst is an excellent host; he is the kind of guy you want to have over for dinner. He appears compassionate, genuine and sincere. Unfortunately, I do not believe the show is going to last long. The topics are not interesting. I believe people watch talk shows for bizarre topics, crazy guests and well known celebrities. It is a brand new show. It needs more spice and more humor.