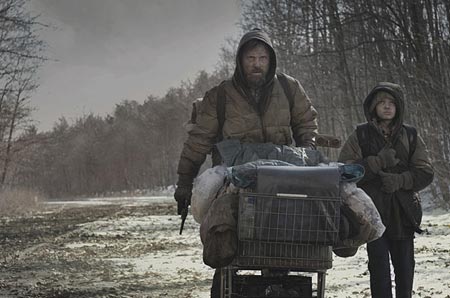 The film is based on the Cormac McCarthy novel, which takes place in a post-apocalyptic America, where only a few humans remain alive in a cruel, cold, barren existence with almost no food or shelter. Each day is a test of survival. And because of that, The Man’s wife commits suicide as what she sees as her only way out. Left alone to fend for themselves, The Man and his son must make their way toward what they feel will be a better place – down south, where it is hopefully warmer with more humankind – “kind” being the important word.

It is a journey filled with tough choices at times, to kill or be killed, steal or go hungry yourself. Eventually The Man loses his battle to survive and The Boy must fend for himself. Yet then, he finds another home with a new family, another man, woman, with children of their own and even a dog. And with one of the children being a female, it gives the viewer hope that indeed humankind will live on and make its way back to a real life again.

Mortensen was sought out as the only choice for the leading role, and provides a brilliant performance as a natural father to The Boy. “The Man” really isn’t as appropriate a name for his character as “The Father” would be. It is his unrelenting selflessness and kindness toward his son that is as powerful as it comes. There are some amazing lines of dialogue that show off such depth to his love. I believe that because of Mortensen’s poignant performance, despite the bleak grayness of their environment, one can take from this film a message that love is the ultimate. I do see an Oscar in his future.

Australian Smit-McPhee, hails from down-under and was picked to star with Mortensen after a worldwide search. Smit-McPhee already has a number of credits to his name and delivered a touching performance. As Mortensen says of Smit-Phee’s acting, “the boy breaks your heart.” They made a truly loving father and son team.

Although the film takes place in a post-apocalyptic America, most of the locations are actually harsh, extreme versions of our real environment. There are no crazy sci-fi special effects, which only makes it that much more relateable to the audience, yet frighteningly all too real at the same time. “It was our conscience as actors”, Mortensen says of the landscape itself. And as Joe Penhall, screenwriter for “The Road” states, “the earth is as much a character as the other three” (The Man, The Boy, The Woman).

Many times you may want to shut your eyes at a certain harsh scenes. Many times you will cry. But in the end, hopefully we all learn the true meaning of what we must do to survive and that is to care for each other.