THE VOICE: Prepare for BATTLE! Sneak-Peek, Round One!

FACE OFF: Sneak-Peek! Who’s The New Who Challenge With Brian Grazer!

THE VOICE: Prepare for BATTLE! Sneak-Peek, Round One! 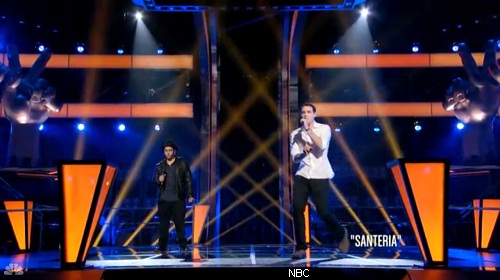 “The Voice” enters it’s season 3 battle rounds starting tonight. The coaches will utilize the help of other music superstars to prepare their contestants for the singing match! Blake Shelton will use the help of Michale Buble; Christina Aguilera will have Billy Joe Armstrong, front-man from “Green Day”; Cee Lo Green will be training his singers with Rob Thomas; and Adam Levine will have Mary J. Blige to advise his team.

Here’s a sneak-peek at two of the battles tonight! First-up is Bryan Keith vs. Collin McLoughlin from Adam’s team:

While preparing for the battle, Bryan, whose father well-known Latin artist who has won two Grammys, said, “People are going to know me for me.”

Colin left grad school to compete in “The Voice”. An unlikely pair, but both are from New York. So, why did Adam Levine pit these two against each other? He said, because they are both super talented and have a great report together. They sang reggae “Santeria” by Sublime. During rehearsal, Mary J. Blige told Colin, “You have to feel more what you’re singing about.”

After their battle, Blake Shelton said, “I thought that was a lot of fun. You two have completely different voices. Colin, I didn’t hear any pitchy things from you. I’d go with Colin.”

Christina Aguilera commented, “Bryan, you have more swag. My personal preference wold be Bryan. Cee Lo Green said, “It’s more soothing which is how Sublime is meant to be. I’d go with Bryan.

The last battle of the night will come from Cee Lo’s team – Amanda Brown vs. Trevin Hunte.

Brown said her singing past includes performing with Adele. The song her and Trevin had to sing was “Vision of Love” by Mariah Carey. Cee Lo said he paired them for the match because they both have a lot of power and control. During rehearsal Cee Lo said he didn’t realize that Amanda had the range that she does, and was starting to regret his decision to match the two up. He said, “I shouldn’t have paired you together. I’m mad”.

Trevin wasn’t comfortable with the song. Upon entering into the ring, Amanda is introduced as “New York club singer with Gospel roots…Amanda Brown!” Trevin’s intro was, “Shy 18-year-old from Queens…Trevin Hunte!”

After their performance, sure to be the best of the night, Adam said, ‘I don’t care who he (Cee Lo) picks, who ever he doesn’t pick, I’m committing to now! Blake said he thought that Amanda was “hot” when she entered the ring, but, after their battle, “I’d be damned if I”m not attracted to you (Trevin) too!”

Christina said “Hands-down – best battle round we’ve had so far. I speak your language.” She said to Cee Lo “Pick one. Pick one so we can take the other one off your hands!” Cee Lo commented on his performers, “Tonight you guys were so evenly matched and so triumphantly to listen to.

Watch “The Voice” tonight on NBC to see which coaches will utilize their new “steal” option on the other coaches contestants!