THE X FACTOR: Bootcamp Week One, Warriors Take The Stage!

If I Walk Into Your House What Do I See First The Mirror Ball Or The Olympic Medals?

THE X FACTOR: Bootcamp Week One, Warriors Take The Stage! 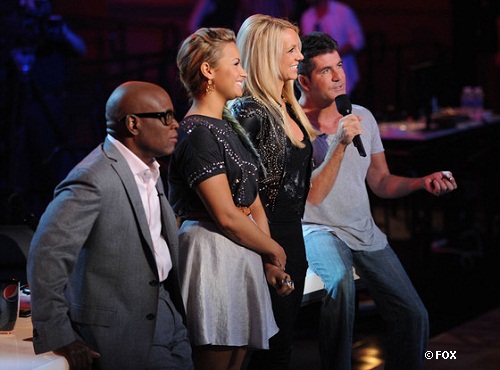 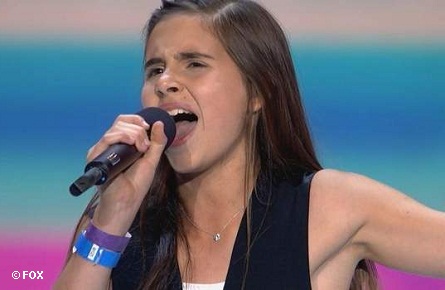 Beatrice Miller (age 13) vs. Carly Rose Sonenclar (age 13)
The girls sang,”Pumped Up Kicks”. Beatrice started the song off by singing it with a cutesy style. Then Carly Rose Sonenclar took over and attempted to out-shine her competitor by singing with a more adult tone. As she sang Briney and Reid commented that she was “amazing.” Demi said, “from experience, it’s so hard when you’re that young.” Simon replied, “that’s my only worry.” 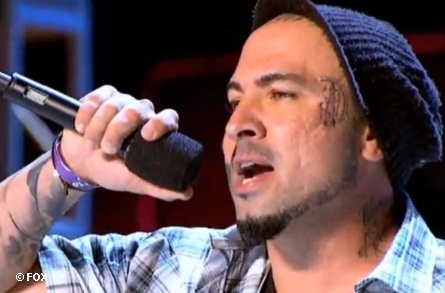 Vino Alan (age 40) vs. David Corry (age 26)
“At my age, it’s probably the only way to get into the door.”Vino commented. “Vino is my brother, but today I need to crush the competition” said Corry. David said that he sees the judges as four road blocks. They sang “What’s Going On?” by Marvin Gaye. After the performance, Vino was disappointed in his performance when he forgot some of the words to the song and threw his cap down. Simon said, “He thinks he’s blown it…I love Vino’s voice”. Demi said “I don’t think there’s a voice out there like that now.”

“We put the contestants head-to-head and they are honestly fighting for it” – Simon Cowell said of the boot camp.

Sister C (ages 17-21) vs. Lauren Jauregui (age 16)
Reid said “That harmony that they do – it’s so special.” Britney reacted with, “I think Sister C is annoying” Demi said, “Really not likable.” Simon’s reponse was, “I think it’s safe to say you two girls don’t want them and thy don’t want you.”

Brandon Hassan (age 16) vs Reed Deming (age 13)
They performed One Republic’s “Secrets”. The judges were happily impressed. Reid said, “I like the passion that they both brought, the seriousness they brought and the fact that they’re both competitive. There’s something that I like about it” said Reid.

Julia Bullock (age 18) vs. Ally Brooke (age 19)
They sang “Knockin’ on Heaven’s Door.” Bullock sang with a distinct Gwen Stafani style voice, and Brooke sang a very soulful and powerful version. After their performance, Simon reacted “A different league right?” Reid said “Somebody won and somebody lost in that battle.”

Tate Stevens (age 37) vs. Willie Jones (age 17)
Both men may be 20 yrs apart, but both have similar country music styles. Willie said that he got the song that they used at the last minute and had to learn it and got no sleep. Tate said in the country music genre the judges would pick him because of his experience and confidence. They sang “Nobody Knows”. Willie struggled remembering the lyrics on stage. As they were exiting the stage, Reid stopped Willie and asked “Willie, did you know the song?” Willie answered, “No Sir” Simon asked “who chose the song?” Willie said Tate picked the song which is from the 1990s and said it would be a good song for them. Demi reacted to the other judges, “I think Tate knew what he was doing.” “Reid said “Tate hustled him.” Reid said he still should have known the song. Wilie cried off stage and said “I do feel like I blew my chance.”

Arin Ray (age 16) vs. Normani Hamilton (age 18)
Arin said he really wants to make it to the judges’ house. Our chemistry on stage has to be 100%. I grab your hand you have to be ready for it” said Arin . He also said that his female competitor is cute but must stay focused and “no girlfriends” until he gets that $5 million prize. They sang One Direction’s “What Makes You Beautiful”. The judges were mostly impressed with Arin. Simon reacted, “I like him, but I can also see him in a band as well.” 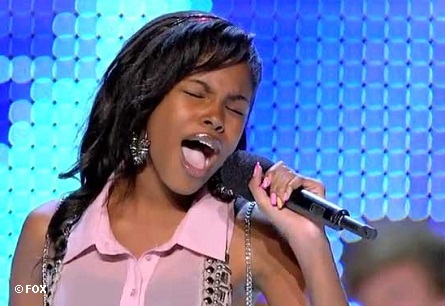 Diamond White (age 13) vs. Dinah Jane Hansen (age 16) –
Dinah said she was very, very nervous going up against Diamond because “she has an amazing voice.” Dinah said she is competing for her family who, along with her cousins all live at home (all 23 of them!). She said she’d like to buy a house for everyone if she wins. They sing Kelly Clarkson’s “Stronger (What Doesn’t Kill You)”. Dinah opened the song. Diamond finished the song then sat on the stage. “That little move at the end – sitting on the stage was genius.” said Reid. “I’m always concerned with people choke. Will they choke again?” Reid commented regarding Dinah’s mess up of the beginning lyrics.

Jillian Jensen vs. Latasha Lee (age 27) –
They performed “Stay” by Sugarland. “When they called out our names together…my heart died a little” said Jillian. “I know I don’t work good in a group. That’s why I’m solso. That’s why I’m here to focus on Latasha.” When their time came to perform on stage, Latasha said she was very confident. But, then her nerves got the best of her and quite. “I’m sorry, I can’t do it” she said to the judges. Jillian stepped-in and sang the song. At the end, Jillian came to Latasha’s defense when Latasha apologized to the judges stating that she knew the song “back there”. Jillian said, “She really did. She really did a great job with it.” Silence, then Simon said “Thank you girls.” The girls exited the stage. Britney stated, “She’s so talented and to go up against Jillian is really hard”. Demi said “You can tell that the pressure is really getting to them.”

Freddie Combs(age 40) vs. Jessie Bryant (age 28) –
Then a string of disasters started with Jessie and Freddie when they both forgot the words. Simon said, “Okay thank you very much” A slew of performers were seen after that also forgetting the words to their songs. Freddie went back stage and started sobbing. He said, “Simon just looked like he was disgusted.”

Jordan Shan (age 15) crack under the pressure and has to leave the stage because she forgot the words. She crys back stage. and Britney starts to cry. 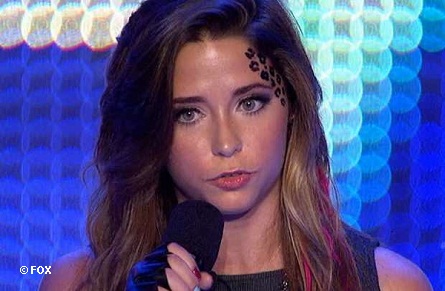 Paige Thomas (age 21) vs. CECE Frey (age 21)
They sang “Secret” by One Republic. Paige said she didn’t want to sing the song and left the room. Somehow, CECE won out on her song choice. Paige said she only fits in the spotlight when Simon asked her why her. CECE told the judges she won’t leave the competition until every judge believes that she is their winner. Simon commented after they left, “They look exhausted. I’ve never seen anybody so tired in my life.” Reid said “It felt like it was warrior time!” Britney said she likes Paige.