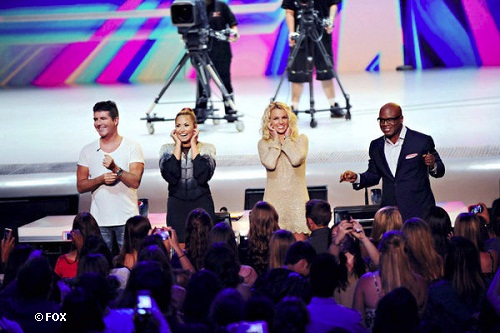 “The X Factor” judges Simon Cowell, LA Reid, Demi Lovato, and Britney Spears arrive to Providence, Rhode Island. Simon Cowell was without a car and had to ride-in on a scooter, late as usual.

“We can sing. We can act..we can cook..we can clean” they said while checking in for their audition. When in front of the judges, Adonis said he owns a restaurant and John said he’s a waiter at Adonis’ diner. They sang “Hello” by Lionel Richie. The crowd started booing. Reid said he was blown away by the one word that he sang and that the good news is that they have a day job. Simon said, “it’s no good…it’s really, really isn’t good!” Demi said she never heard that song so “hood”. They received four “no’s” from the judges.

Arin Ray – Coming Back As A Solo Artist

Sixteen year old student from Cincinnati, Ohio who made it through as a soloist last season. But, they put him in a group called “Intensity.” He said, “America got to see me but not as a solo artist.” He said he’s back to “have another crack at it”. He sang an original song called “Count On Me”. Reid said “I liked you last year and I like you more this year. You embody X Factor all day and night.” Britney said, “You’re a true star. You’re the reason we’re here right now” Demi reacted, “You’re confidence is really, really hot… I’m really, really impressed. You HAVE the X Factor”. Simon said, “Something’s happened to you in the past 12 months. You’re a different person. You have this quiet confidence.” Arin said he wants to win this time.

Changyi Li – I Want to Be A Superstar Like Michael Jackson…

Unemployed 52-year-old Changyi Li from China said she’s been in America for 12 years and came from Baltimore County to attend the auditions. She wants to be a superstar like Michael Jackson, Whitney Houston, Mariah Carey, Taylor Swift, Lady Gaga, and Britney Spears. She sang “My Heart Will Go On” by Celine Dion. Simon said, “The good news is if they ever re-make the film you could replace the iceberg. Just sing the song and down it goes. It wasn’t a compliment” Britney said, “I don’t think singing is for you. You should probably start dancing or something.”

Dinah Jane Hansen is a 15 year old student from Santa Ana, Ca. She comes from a household of twenty family members including her mother, her parents, and mother’s brother along with her two sisters and children. Dinah said that Britney was one of her first idols. Dinah sang “If I Were A Boy” by Beyonce Knowles. Reid said “It’s so tough to take a song from Beyonce and actually do it justice. Let me tell you, you took that thing to places that even Beyonce didn’t take it. And you didn’t copy her. That was unbelievable”. Britney said, “You made my day. I felt that I had a connection with you the moment you started singing.” Demi said, “You’re someone that I will buy your music one day. I see you going really far.” Simon said, “This is why we came to Providence is to find someone like you.”

Sixteen-year-old Natalie Martin said Britney Spears is her biggest inspiration. After her audition, Britney responded, “I feel like you’re a true star”.

One4Five – Take The Glasses Off

The group “One4Five” performed a rap song. Demi said “I’m blown away. I’m completely sold and you guys are going to be really huge one day.” With Simon’s “yes” they got four yeses.

Beatrice Miller – You Really Are Special

Thirteen year old Beatrice Miller impressed judges with “Cowboy Take Me Away” by Dixie Chicks. Reid said “You really are special and you’re going to get from me the first ‘yes’.” All of the judges said yes to this young, talented singer.

Daryl Black is a 37-year-old father of five children residing in Sacramento, California. He says “It’s been a lot of rough times. They deserve more…today is the day things can change. It’s my time to shine,” stated Daryl, and “I’ve never had to sing for $5 million before” he said to the judges before singing. He sang “Stereo Hearts” by Gym Class Heroes. When he was done, Demi said “You have an amazing voice.” Reid said “A golden voice. Confident too.” Britney said, “I think your stage presence was amazing and your voice was very smooth.” Simon said he reminded him of Nat King Cole. “You’re smart and do something that is different from everyone else. We have a place for you.”

Tara Simon – I’m The Simon of My Studio

Tara Simon from Altanta Georgia. She owns a studio, Performing Arts Center. She’s a singing coach and claims to be the Simon Cowlel of her studio because she has made students cry. She sang “Without You” by David Guetta. “I think you over-sang the song in parts. But you’ve got the talent and you’ve got steel in your eyes and I like that ,” said Simon. “You are a true performer,” said Britmey. Demi said “Once you did that Mariah Carey stuff, I was really blown away.”

Thirteen-year-old Trevor Moran from Temecula, Ca. His mother said he’s been singing and dancing ever since he was little. “I have waited to be a star since I was three or four…doing these videos has really built up my confidence.” This FOX clip ends on a cliff-hanger where Trevor is seen lying on the floor with his mother comforting him. Show Production Assistants are heard looking for him, then once he’s found, they call 911. Once he recovered from dehydration, Trevor got on stage and performed “Sexy and I Know It” by LMFAO. Simon said, “I’m not entirely sure that was age appropriate.” Reid said, “You own the stage. You rocked the house!” Demi responded, “You were so much fun to watch. I was dying over here. You’re too cute.” Britney said, “I liked you a lot. You are completely adorable.” Trevor received all four “yes’s” from the judges.

Nick Youngerman – One Song Can Change Your Life!

Nick is twenty year old janitor from Ohio. Britney was so moved that she stood-up during his performance of “Ice Ice Baby” by Vanilla Ice. Britney said she thought he was adorable. “This is how one song can change your life” said Simon giving him his fourth “yes” to move on to the next round.

David Correy – Do What You Love To Do

David Correy is 26 years old and traveled at night through two thunder storms in thirteen hours with his brothers to make it to “The X Factor” auditions. He said that not knowing his biological Mother allows him to sing with so much soul. He sang “Just the Way You Are” by Bruno Mars. He said he’s different because he hopes this opportunity reconnects him with his birth mother. Britney said he has the most amazing stage presence. Reid said that “There’s something really charming about you…you can really sing. You’re going to go far.”

Young singer Nick Perrelli at sixteen sang a very impressive Frank Sinatra “Fly Me to the Moon”, and got four easy “yes’s” from the judges. Britney said “I thought you were brilliant.” Simon said, “you are one to watch. I’ve got a feeling about you” Nick said that was the “most awesome thing he’s heard in his lifetime.

Freddie Combs – If My Best Don’t Get It Done, I Move On!

From Greeneville, Tennessee is where 41-year-old Minister Freddie Combs traveled to audition for “The X Factor”. He said in the year 2009 he weighed 920 pounds and almost died. Since then, he’s lost 400 pounds. He was wheeled onto the X Factor stage by his wife of 16 years and told judges that he has been on disability because of his obesity. He sang “Wind Beneath My Wings” by Bette Midler. Reid responded to his performance by stating, “My comments for you will not be out of sympathy for anything that you’ve dealt with. It’s going to be based on your voice which is heavenly.” Britney said “I find your voice shockingly amazing.” Demi said “You have a really strong, beautiful voice and it’s really touching too.” Simon said, “When I heard you sing I had a vision in my mind of you standing singing that song. Healthy, happy and maybe you need some inspiration to help you to that next stage.” Simon said he’d back him if he backed himself and gave him a “yes.”

Original “Wind Beneath My Wings” by Bette Midler

Jaime – Just Crazy About Each Other

Jaime is a duet group made-up of Amed Jamie and Sympathy from Miami. Amed said that they feel like something outside of them brought them together and have been inseparable since they met and now engaged. They sang an original song called “Will You Be My Baby?” Simon said “If I was auditioning for a cruise line that would sort of work. It was so corny. So what is not happening right now. It’s cabaret.” Reid said he didn’t get it and gave them a “no” along with the other three judges.