Walt Disney’s TRON: LEGACY opening in IMAX 3D on December 17th is not only another break-through in film making, it’s a film made by many first-timers in an out-of-the-box, non-conventional, non-“Hollywood” kind of way.

Directed by a first-time film director, Joseph Kosinski, whose background is architecture he brought-in a team of some fellow first-timers. “Lost” show writers Adam Horowitz and Eddy Kitsis, as well as Vehicle Concept Designer, Daniel Simon who designed the Light Cycle for the movie, had also never worked on a film. Simon commented that he’s accustomed to designing cars, sometimes twenty at a time that may never make it to implementation, while with TRON LEGACY he knew that the Light Cycle would be a car that would definitely be developed. 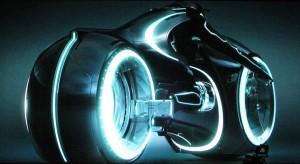 Kosinski stated that although new to film, the tools in his architecture schooling were the same as he used to make TRON LEGACY. “I used the same digital tools as Digital Domain and ILM use in movies..I think the biggest challenge is story and character. The digital stuff to me is not as scary”. Coming out of a commercial world, Kosinski stated that before TRON LEGACY, he was accustomed to working on projects that lasted 8-10 weeks in contrast to TRON LEGACY which was a three year project.

Co-producer, Justin Springer stated, “Because of Joe’s background, he (Kosinski) brought people in from all disciplines. Car designers from around the world as well as architects, engineers – without thinking about how do we do it in the movie business”. 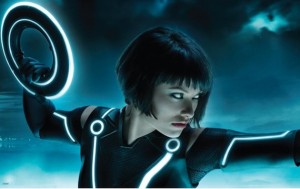 The main technical difference in the original TRON and the sequel, TRON LEGACY is how the film literally was lit around the lighting in the costumes. In the first one, the lighted costumes were a post-effect. But, in the sequel, costume designer Christine Bieselin Clark stated the effect had to happen “in-camera” and that “turned the design process on its head”. Consequently, the whole movie was shot in a “cave-like” set environment where the brightest thing was the light in the costumes. Kosinski stated, “The film was shot around the lighting of the suits”. With wide-open lenses, this gave a very natural 3D depth of field look to the film because there was no conversion.

The key ingredient for the team was to make a movie that could stand-alone. Writer Edward Kitsis said, “The inspiration was we wrote this like fans. We wanted to design a movie that would stand alone. You wouldn’t have to see the original to appreciate this one.” He also added, “We (himself and Adam Horowitz) are writers today because of movies like TRON”.