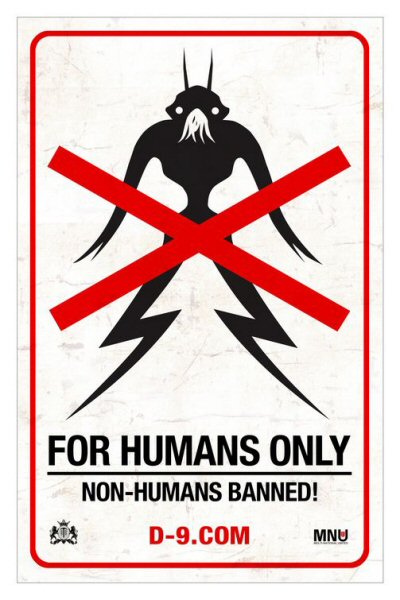 Orson Welles’ “War of the Worlds” meets Sam Rami’s” Night of the Living Dead”, with a little bit of “The Day that the Earth Stood Still” is a familiar underlying mix that can’t quite compare to “District 9”.

As stated in a New York times article, first-time director of “District 9”, South African, Neill Blomkamp explained, “I was trying to make the science fiction feel vaguely familiar. The South African component would be the alien component.”

Produced by “Lord of the Rings” director Peter Jackson, “District 9” accurately campaigned the pre-release of the film’s storyline with “No non-humans seating” reminiscent of “to the back of the bus” or “no coloreds at drinking fountain” signs in earlier times in a segregated United States of America.

The film opens with multiple news reports on the arrival of a stationed alien spaceship over Johannesburg, Africa. Documentary-style interviews with various reliable sources who have been following the incident over the ship’s twenty year presence. Because the spaceship never opened it’s doors, the residents of Johannesburg go into it by cutting-out a hole in its metal. Once inside, cameras picked-up very malnutrition alien beings. The town did what any town would do. They rounded-up the creatures and placed them captive in an internment camp, or, “District 9”. A corporate bureaucracy, MNU (Multi-National United) is in charge of ordinance of these camps. The newly married and son of the head of MNU, Wikus (Sharlo Copley) is promoted to be in charge of the “District 9” on-site investigations and evictions of alien tenants in a process to move them to a different concentration camp. 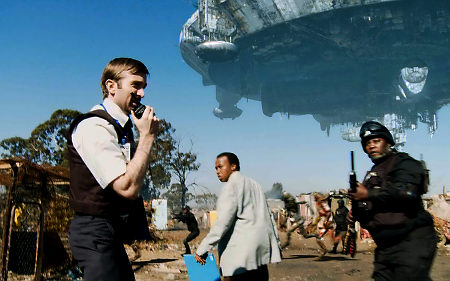 Through comical, parody-style and quirky interviews with sources as well as Wikus himself, the course of events that take place leading-up to a seemingly irreversible physical and psychological damage done to Witkus, becomes the centerpiece of the story as well as a dramatic turn in the character’s attitude.

Much of “District 9” is a movie within a movie. We are watching a documentary at times through the documentation’s camera lens, and at other times, the making of the documentary, as well as security camera footage. All of this is a montage of clips being pieced together in an effort to explain what happened to Wikus. The inevitable outcome, sure to lead to a “District 9” sequel.

Extraterrestrials of “District 9” are aggressive, barbaric, and described by locals as ghetto, thug-like slum and referring to them with a derogatory term they assigned to them, “Prawns”.

Among the heaps of bad aliens, a rare jewel is found, a super intelligent alien being working on a resolution to get the aliens back to their home.

This was an exceptionally rare original treat of a movie taking its viewers on an unexpected ride. Though the movie is about inhuman alien beings, it touches on so many real human emotions and issues: compassion, segregation, bigotry, prejudice, fear, and loyalty.