Reported by: Charity C.
Charity’s first-hand account of the audition process for the new syndicated version.

“Are You Smarter Than a Fifth Grader?” will be joining syndicated game show television. Filming for it started June 12th. Rumor was that they didn’t have a format for it yet when the contestant casting began earlier in April.

HOLLYWOOD JUNKET host, Charity, auditioned for the show. We had to hold this story earlier due to confidentiality agreements signed with the show because our host made it as a contestant on the show. Read about her experience, and you can catch her in the new promos running on television now. 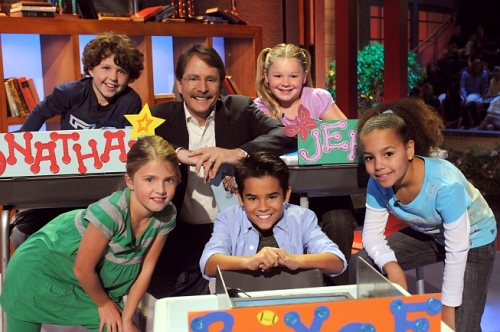 It was 10:40 am and Francis and I were scheduled for 11am. There were couches and tables set up like a living room where we were to complete our applications and take a quick quiz. Two other potential contestants were also in the room. I was stressing-out on the quiz because I thought that I didn’t know any of the answers. I had to take deep breaths to think of the answers. Once I calmed myself down, I was able to figure-out the answers. There were three pages of questions. Some subjects covered included: history, math, word problems, and true or false questions.

At least one other show that I could remember was also being casted in the same building. It is MTV’s “Bully Beat-Down”.

I finally got called in to be seen. I met with casting associates, Brook and Matt. I was surprised that I knew most of the answers to the questions! Brook and Matt wanted me think out loud before I answered the questions. I thought everything was going to be harder than what I expected. I was also asked: “What would you do with $25,000”, “What would you do with a million dollars?”, “If people had to describe me what would they say?”

Matt said that in the syndicated version contestants actually have more of an advantage. Brook gasped when she discovered that I was the infamous “girl that fell off the MTV Next bus”!

As for Francis, he said he never really answered the questions correctly, but he still had fun. I actually thought I wasn’t going to get any of the answers right, but I did. We both thought that the audition was laid-back and didn’t feel so intimidating. WE loved it!!!!

I actually might be smarter than a Fifth Grader!! You’ll have to wait and see! Yes, I did get a call-back, and YES, I will be a contestant on “Are You Smarter Than a Fifth Grader?” Hollywood Junket was there when my episode is filmed on Sunday, June 14th!