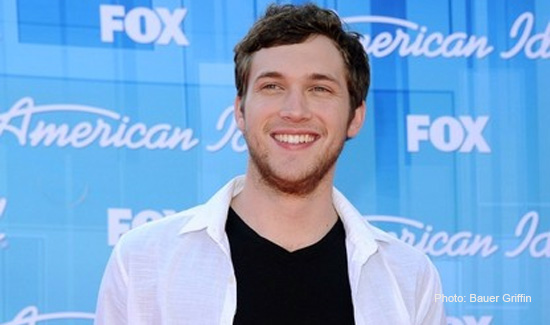 At a recent press conference in Los Angeles, California, FOX’s “American Idol” winner of season 11 Philip Phillips talked to reporters about traveling, being away from home and his recent bed rest while he was recovering from the removal of a kidney stone.

When asked what he misses the most from home, Phillips replied, “the food. I miss the food and seeing familiar places”. During a reporter’s previous interview with Phillips, Phillips stated that the two things that he has to have are his guitar and a “good bed”. So, after all of the bed rest, will Phillips still desire a good bed once on tour? His response was, “I’ll probably never be done with the bed. Not a lot has changed. I still love to sleep. But it’s been kind of hectic.. I’ve been looking at four walls.”

Is Phillips worried if his recent illness will affect his performance during the “American Idol Live! Tour 2012”? Phillips stated, “I’m pretty confident. I’m going to have fun with it. I’ve been recovering but I’ve also bee practicing when I can.”
One reporter asked Phillips if he plans on doing anything special on stage when he gets to his home town in Leesburg, Georgia. Phillips said that he usually doesn’t think about it until it hits him while he’s on stage.

The Idol contestant the Phillips gets along with the best he said is Colton. “Not really. I don’t like him!” Laughter followed. The American Idol Live! Tour 2012 will kick off July 6 in Detroit.