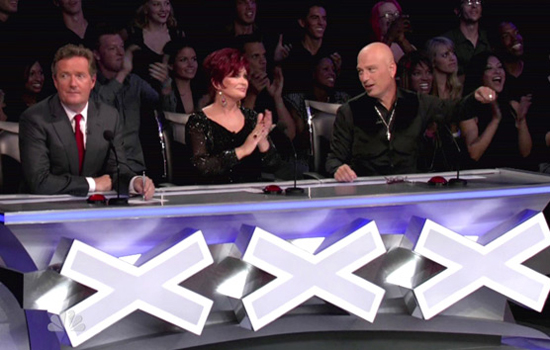 From Hollywood Junket video archives:
Sadly, “America’s Got Talent” will be going into it’s seventh season without it’s most “hated” British judge Piers Morgan who is choosing to focus on his CNN talk show. HOLLYWOOD JUNKET has had that great opportunities of interviewing Morgan a number of times over the last two years.

We’ve put together an homage of clips collected showcasing his anointment for co-judge Howie Mandel. Mandel describes Morgan as reminding him of his mother. In fun, Morgan says “Howie takes the whole thing (competition) as a big joke.”

During this past season’s AGT’s finale show, Morgan says Howie was what he found to be the most annoying thing. Then, back to our first coverage date of the show, Sharon Osbourne pin-points the reason why Morgan was not easy to get along with at first…”he’s Irish. That explains so much!” said Osbourne.

Piers Morgan will be replaced by another big name in media whom is also notorious for not being liked by many and a super shock-jock, Howard Stern. Stern will be joining the show during the last leg of auditions which remaining dates are January 14 and 15 at the Austin Convention Center, and Charlotte, N.C. on February 4 and 5 at the Charlotte Convention Center.