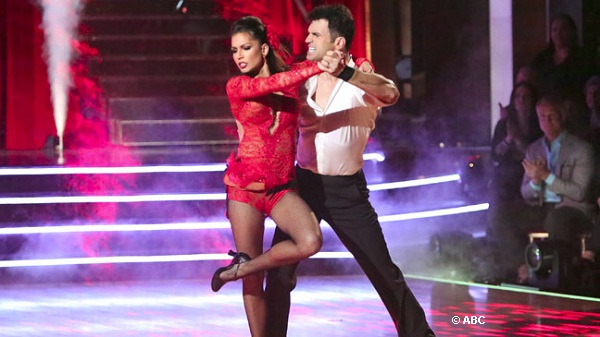 Her partner, Tony Dovolini experienced a back injury during the competition. They were the only couple to make it to the finals that never won. They both worked incredibly hard throughout this season and definitely earned their mirror ball! For their repeat dance, the couple danced the Samba which was their dance in week three of the competition. The Samba dance was excellent; they began on a platform with graffiti being thrown around them. There was an abundance of twists, turns and ended with streamers blowing in the air. Bruno commented saying, “What a wonderful blend of moves but Melissa what is so good to see is your confidence has grown”. Carrie Ann stated, “Fabulous, brilliant!” They earned a perfect score of 30 for this routine.

Last night, Kelly Monaco and her partner, Val Chmerkovskiy was the first to perform. Before they came on to the stage, a video of them rehearsing was shown. Kelly made an interesting statement, she said they were able to make it to the finale without ever earning a single 10. They owe it to their fans for consistently pulling through to keep them in the competition. The couple chose the Paso Doable as their repeat dance and completely nailed it. Len Goodman commented, “That is still your best dance yet”. Kelly looked beautiful in her sequined, maroon gown. Once again, Val was not afraid to show off his abs and chiseled Pecs. Bruno Tonioli, said, “You burned that dance like an awesome fire angel fueled by passion and driven by desire”. The twosome earned a total of 29.5 for this dance!

Shawn Johnson and her partner, Derek Hough chose the Quick Step as their repeat dance on Monday night’s episode. Shawn believed it was their statement dance. The couple rocked the stage in their black and white costumes and risky dance moves. They both entered the stage doing flips and ended their routines by running up the steps and diving in front of the band. Carrie Ann commented saying, “It is what I saw the last time, I am a little disappointed”. The couple earned a total of 27 for this routine.
-Written by: Jaclyn Ashley