Biggest Threats on THE VOICE Season 7 Road to Lives Recap 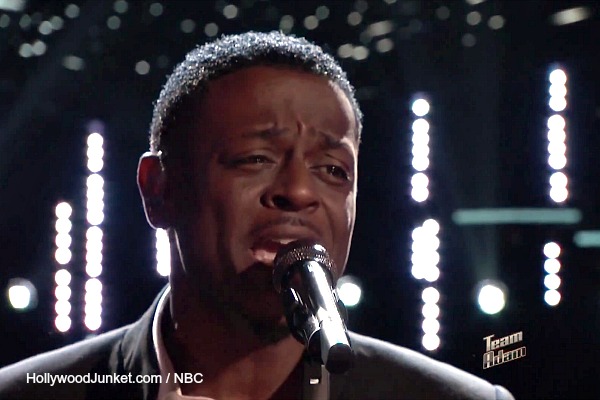 The first night of season 7 of “The Voice” Live Playoffs was opened by coach Adam Levine’s band Maroon 5 who performed on “The Voice stage. Before his performance, Adam said that his team is getting stronger and stronger. “The evolution is occurring as we speak,” he said.

Gwen Stefani said she thinks that there’s something magical about “The Voice” because everyone is so special. Pharrell said his team is blossoming. Blake said “The Voice” is a great way to discover talent.

For the first time this season, The Voice is live. The Top 5 artist will compete to win The Voice. They will work one-on-one with their mentors. Team Blake and Team Adam are up first. America will pick two artists from Team Blake and Team Adam tonight to move-on, and the coaches will each chose one. Blake said he doesn’t really talk about the live shows with his team and it’s better for them to rehearse and to do the thing that they do on stage.

Adam said he told his team that the live show is another performance, and joked that it’s not really live! Gwen said her team has the advantage because their turn is tomorrow, and tonight, they get to watch. Pharrell said he’s super-proud of his team and is “super-pumped” that the artists on his team chose him.

Any artist in the Top 10 iTunes will have that multiplied by 10 times for votes.

Blake said Taylor represents an era of Country music that has disappeared and Country doesn’t have anyone with that sound right now. Taylor sang “Long Time Gone”.

Coaches Comments: Gwen said she was shocked how comfortable Taylor is on stage and she sounded beautiful. Gwen noticed her tattoo when her skirt flipped-up. Adam said Gwen has laser vision to have seen that. Adam said Taylor is great and confident and it’s cool to watch. Coach Blake asked to see her tattoo. Blake said he’s learned that she blends her personality with her sound.

Adam predicted that the young female audiences will fall in love with Chris.

Coaches Comments: Blake said it was a tough song to navigate and told Chris “great job”. Pharrell said he floored everybody. Gwen said he is amazing on stage and people need to know how hard it is to sing the long notes that he did. Coach Adam told Chris he was excited up there, but kept control and contained it so well. He called it amazing and said Chris has that “intangible quality.”

Blake got a clear box of Lucky Charms that is marshmallows only to represent Jessie Pitts. Blake compared her voice to it. Jessie is singing her version of “Holding Out for a Hero.” Blake said she’s not a country artist, but she’s a story-teller.

Coaches Comments: Pharrell said she finds the sweetest of the pockets and stays there the whole time. He loved it. Gwen said Jessie is so natural and original and complimented Jessie’s skirt. Adam said “this is the moment now where you have to do something original. He called it her best performance so far. Coach Blake said Jessie took one of those type of moments – where an artists plays a guitar and sings in private, and brought it to the stage. He called it something “impossible to do.”

James David said he’s gotten a lot of marriage proposals since his time on “The Voice”. James David is singing Garth Brooks song “Two of a Kind Working on a Full House”. James said Garth Brooks combines country music with elements of rock and James said that’s the kind of artist that he wants to be. Blake said the song is up-tempo and will show a different side of James.

Coaches Comments: Pharrell said they knew from the beginning that James was special and he “made them pay attention” by the way he controlled the end of the song . Gwen said James’ whole face was working the room and he’s engaged the entire time. Adam sent his congrats to James David! BTW – James corrected Adam that it’s “James David” and NOT “James”. Blake said James continues to “be that rock” and all his experiences are really paying off right now.

Matt decided to sing Beach Boys song “God Only Knows”. Apparently, it’s the first Beach Boys song on “The Voice”. Matt dedicated the song to his mom who loves the Beach Boys. Adam said his goal is for Matt to transcend all reactions.”

Coaches Comments: Blake told Matt that he sang it “perfectly” and called it an interesting and great choice as well as risky! He combined orchestrating with “ass-slapping” said Blake. Pharrell said “that was awesome.” Matt and Beach Boys fans should be really pleased he commented. Gwen said she was moved almost to tears when Matt song out. Gwen called it amazing and agreed that it was a risky song. Adam said you don’t get bigger than that as far as risk goes and said Matt is unique and original. There’s no one like Matt and he blew Adam away.

Singing “Try” by Colbie Caillat Blake said Reagan is “a brilliant artist” because she blends Indy artist sound with an R&B feel. Her 16th birthday falls on elimination day. So, everyone remember to vote!

Coaches Comments: Pharrell said she let everyone know what she has. Gwen said it touched her that she listened to her regarding the fashion advice and song choice. She loved it. Blake said he still thinks she is one of the most important artists that they’ve had on The Voice. Blake and Gwen both expressed how impressed they were that at her age she is able to maintain singing and playing the guitar at the same time.

Taylor was stolen by Adam from Team Pharrell. Adam said in Taylor’s live performance, he’ll be revisiting what caused a spark during his Blind Auditions. Taylor said the meaning of the song he’ll be performing – “Cool Kids” by Echosmith is impactful for him because he moved a lot and always wanted to be part of the cool kids.

Coaches Comments: Pharrell said he’s still proud of Taylor, and congratulated him. Gwen said for Taylor, he came out already so great and “it’s like watching a peer.” Adam said Taylor blew everyone away from the start and he keeps impressing everyone. He said Taylor amazes him and can’t believe he was available to steal.

Adam gave Mia Lana Del Rey song “Young and Beautiful”. Mia is close to putting her into a Pop singer box but doesn’t want her to do anything too safe. Adam said Mia has a powerful voice. Mia said she wants to take a powerful song and prove to the audience she can do it. Adam said if she takes a risk, people will understand how good she is.

Coaches Comments: Blake said Mia’s voice was perfect for that type of song and it takes a lot to come out and be that broken down on stage. Pharrell said Mia was the star of that performance and shined from the band and said she’s had a lot of growth. Adam said he expects her to be great “but this was different and amazing.” He said she can sing anything, but now he can finally hear the tone of her voice and is so amazed by her holding-back and came across in a super, powerful way.

Damien said about 20 people per day notice him on his TSA job now. Adam gave him a Sam Smith song – “I’m Not the Only One”. Adam said Damien shares the emotional quality with Sam Smith. Damien said he will pull from a sad place in his past to relate to the song.

Coaches Comments: Blake said Damien has the ability to combine a soft, smooth voice with power and range. Pharrell said the way his voice goes up and down is like he has an elevator, and the people at Louisiana airport are going crazy right now. Gwen said Damien has some truth to him that speaks to everyone and the audience was the loudest with him on the stage. Coach Adam said Damien really capped it off, then gave his best Pharrell impression. Adam said this whole room and the whole country felt Damien’s performance.

Blake gave Craig “Some Kind of Wonderful” song to sing because it’s important to re-establish his style said Blake. He is as Southern rock as Travis Tritt. Blake said he attacks it, beats it up then eats it. Blake said Craig has to pack in as much as he can within the small window of the live performance that he has.

Coaches Comments: Pharrell said he told Craig to stay on his own path and is happy he ended-up with Blake. Gwen said Craig showed how much power he has over the room. Blake said it was the performance of the night and it was so much power and muscle and his stage presence. Blake admitted to being stupid for letting Craig get passed around.

TUESDAY NIGHT: Pharrell with be performing “Hunter”, a song written from the perspective of a girl, tomorrow nigh on “The Voice” stage.