HOLE IN THE WALL: Bringing Grandparents, Athletes to Cartoon Network!

Dating is never easy. But, doing it on a dating show like GSN’s “Baggage” is downright a tightrope act that involves a slew of, well, unexpected surprises and obstacles.

“Baggage”, hosted by Jerry Springer, is currently shooting its second season. HOLLYWOOD JUNKET was on the set last week during filming to get a sneak-peek.

Each episode begins with Springer at the side of the dater, or contestant, whose goal is to weed through their prospects’ “baggage”/shady pasts. Springer announces that the dater also has “baggage” to reveal at the end of the show. He states three possible choices of what this horrific reveal might be, one of which is true.

The contestant chooses the person that they want to go out with by going through a series of levels in the game with each level revealing a bigger baggage than the other. The first level is referred to as “Small Baggage” where players must open the smallest case of luggage to display in-writing what horrible quality they possess. The next level is called the “Deal-breaker Round” where the next case, a medium-sized bag is opened. In this round, the three players each get the chance to explain a little bit about the un-desirable trait that is revealed within the case. The contestant “dumps” one of the three players in this round.

The last two players are put through the “Hot Seat Round”. Players get the chance to defend their baggage in this round and be-little their opponent. The two remaining players must also step into a “Hot Spot” where they are grilled by Springer with a series of rapid-fire five questions that they must answer honestly. The nature of these questions are the following: name the strangest place where you’ve had sex; the reason you were most recently dumped. 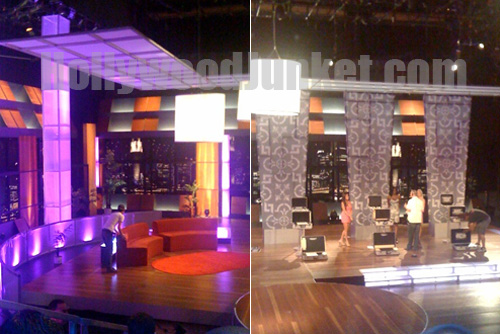 “Baggage” set. The “Hot Seat” round (left), and where baggage is revealed (right).

The final round is when the “largest baggage” is revealed by the two remaining contestants. This large case contains the most unexpected reveal about the contestants. The Dater must choose the lesser of the two evils for whom they will pick to be their date. After making their choice, the dater opens their large bag to show what their date is faced with. The date can choose to go forward with the date by stating: “I can handle your baggage”, or not proceed with the date by responding: “I can not accept your baggage”. Out of the three shows that we saw that day, only one dater was rejected by their choice.

The various singles we saw on stage during the filming day included baggage that revealed a voodoo doll fetish, an imaginary best friend, a home-wrecker, a bankruptcy, a relationship cheater (14 times!!) and a wearer of “guy liner”.

This is a must-see episode, and the one that will have your co-workers talking about in disbelief around the water cooler the next day.

“Baggage” is entertaining, but is scripted in some places. Contestants are coaxed on what lines to say after they’ve been eliminated as well as how much detail they should or shouldn’t give away by producers to their prospective dater about their reveals. Springer is a great host, using hilarious comebacks to contestants as they are walked through the unpredictable roller coaster of outcomes “Baggage” provides.