It was our first visit to the live GSN show, “Big Saturday Night!”. This was the first Saturday since filming started that I didn’t have an excuse to haul myself some nine miles away from Hollywood to attend the live taping. Although it doesn’t sound like a lot. In L.A. traffic, it sure translates into almost one hour of driving easy! 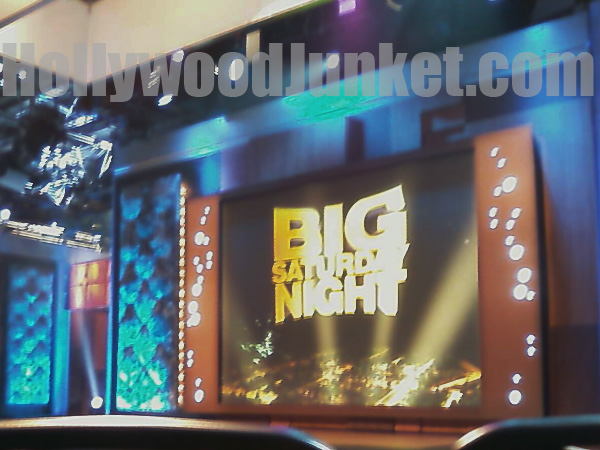 The set is not big and consists of a medium sized stage that is routinely changed-out very quickly in the short allotted time that they have to do so. Huge play boards are set-up for each contestant with identical game pieces. Once the first contestant is done with his or her game, the big board is hurled around rapidly and vigorously by crew at lightning speed as the opponent approaches the stage.

I do believe that GSN has invented a new genre of show with this. It’s a unique blend of sketch comedy/game show/interactive variety show! For those whom have not seen the show yet, it’s all done in real time, and hosted by three terrific personalities: Ross Mathews (“The Tonight Show”), Charissa Thompson (“Fox Sports”), Keegan-Michael Key (“MadTV”). Two segments include phone contestants. They are two competing phone contestants that must play a game based on clues given to them by a show guest. Tonight’s celebrity guest was Claudia Jordan from “Deal or No Deal” who announced she will be the co-host of this year’s “Miss Universe” pageant. Go number one!! 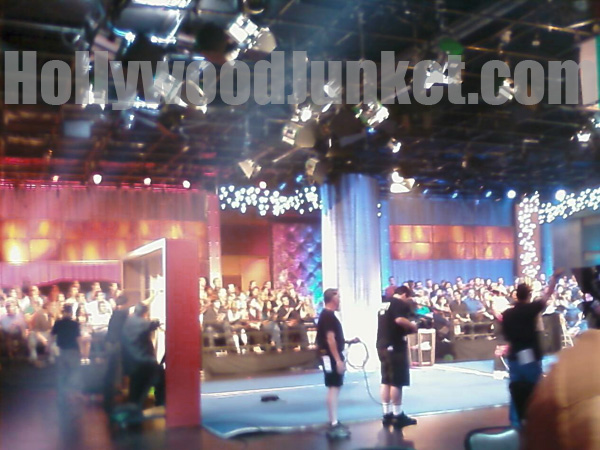 Crew cleans-up after a live game on stage.

“Big Saturday Night” broadcasts live during the span and commercial breaks of “20Q”, and
“The Money List”. The studio audience is figuratively split in half. One side is the red side, and the other is the blue side. Two contestants play a series of games throughout the whole show. Some of these games result in a win for the audience members as well depending on who wins, the blue or red contestant.

Some “live” facts: Production actually runs the broadcast of “20Q” and “The Money List” on the three big studio screens when they’re not shooting. It’s fun to see the studio audience watch these shows on TVs and playing along. Audience members sitting in the pit, must move every time a new set-up is done for the contestants playing on stage. Then they are seated again. This happened about five times. The audience side that did not win, had some members that were very upset at the losing contestant, called her names, and even accused the show of being “fixed” (which is impossible by the way).
As consulation prizes, audiences were given hard copies of “TV Guide”. Hosts are all very friendly and interact openly with each other and audience. There were a lot of out-of-town audience present hoping to win big!

The show asks all audience members to bring a bill statement with them. This is in fact to randomly select one person in the audience from each side and the show actually pays that bill. One woman selected was so overwhelmed and ecstatic to be having the show pay her $1,900 bill. On our side, HOLLYWOOD JUNKET host quietly sat with her $23 gas bill that she brought.

HOLLYWOOD JUNKET was unlucky with any wins. Not such a “big Saturday night” for us. Guess we sat on the wrong side. Prizes include $1000, gift cards for “Omaha Steaks” , “F.Y.E”, and $50 cash.