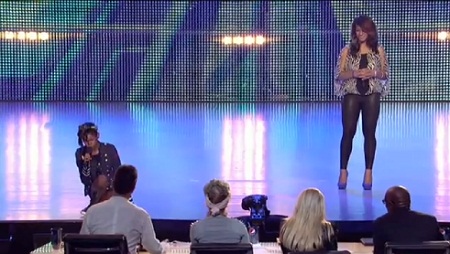 Diamond White (age 13) vs. Dinah Jane Hansen (age 16) –
Dinah said she was very, very nervous going up against Diamond because “she has an amazing voice.” Dinah said she is competing for her family who, along with her cousins all live at home (all 23 of them!). She said she’d like to buy a house for everyone if she wins. They sing Kelly Clarkson’s “Stronger (What Doesn’t Kill You)”. Dinah opened the song. Diamond finished the song then sat on the stage. “That little move at the end – sitting on the stage was genius.” said Reid. “I’m always concerned with people choke. Will they choke again?” Reid commented regarding Dinah’s mess up of the beginning lyrics. Dinah was worried after the performance about her mistake. Diamond consoled her that she did a great job at continuing without falling apart. MORE: http://hllywdjnkt.co/PVQZSo