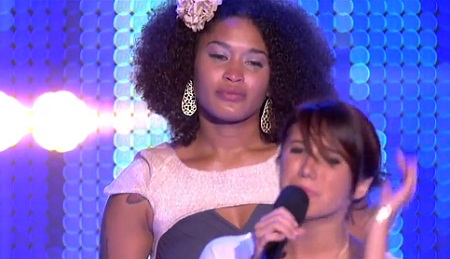 Jillian Jensen vs. Latasha Lee Robinson (age 27) –
They performed “Stay” by Sugarland. “When they called out our names together…my heart died a little” said Jillian. “I know I don’t work good in a group. That’s why I’m solo. That’s why I’m here to focus on Latasha.” When their time came to perform on stage, Latasha said she was very confident. But, then her nerves got the best of her and quit. “I’m sorry, I can’t do it” she said to the judges. Jillian stepped-in and sang the song.

At the end, Jillian came to Latasha’s defense when Latasha apologized to the judges stating that she knew the song “back there”. Jillian said, “She really did. She really did a great job with it.” There was silence from the judges, then Simon said “Thank you girls.” The girls exited the stage. Britney stated, “She’s so talented and to go up against Jillian is really hard”. Demi said “You can tell that the pressure is really getting to them.” MORE: http://hllywdjnkt.co/PVQZSo