Starting January 14th, GSN will be airing a new original reality show centered on its host of “The Newlywed Game”, Carnie Wilson.

“CARNIE WILSON: UNSTAPLED” advertises itself as being an unfiltered look at the inside life of the daughter of Beach Boy Brian Wilson. Carnie Wilson opens her life to cameras as she serves as a mother, a wife, a game show host, and the new role of entrepreneur in her attempt at starting a baking business. 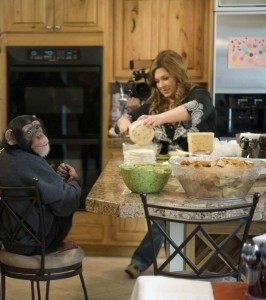 The first episode introduced the main people In Wilson’s life that viewers can expect to see on a regular basis throughout the series. Included are: her husband, Rob Bonfigilo (musician), two daughters -Lola and Luci, Aunt, and personal assistant, Dee Dee (“The Honeys“), personal trainer “Diamond” Dallas Page (former pro-wrestler), her manager Mickey Shapiro, and her two BFF’ s and hairdressers (from Syndicate Salon), Daniel and Brian, a.k.a. “the Bo- Bo’s”.

In a half-hour format, the first episode establishes its’ heroine, Wilson as someone almost everyone can find something to relate to. Her drive to succeed while keeping a good balance in her home life; weight issues; a drinking addiction; and financial pressures to survive and maintain the lifestyle her family is accustomed to. Wilson is host of GSN’s #1 rated show, “The Newlywed Game”.

In one scene, Wilson’s manager, Mickey, makes a house call to discuss his concern about her new baking business interfering with her work load of 65 shows hosting GSN’s top-rated game show, “The Newlywed Game”. She responds very candidly, and honestly, “If I don’t do this [bake], I go drink”.

Wilson also speaks very openly about her goal to loose weight and maintain it. At the age of 25, her weight approached 300 lbs. She underwent gastric bypass surgery (or stomach stapling), which streamed live on the internet. As the show’s title suggests, ‘Unstapled”, gives viewers a raw look at Wilson’s life, and weight battle.

With a slew of new reality shows popping-up each season, and mid-season on television, I expected this one to be much in the same vain. A highly produced, highly scripted “reality” show. However, I was pleasantly surprised by “CARNIE WILSON: UNSTAPLED”. It seems to be in fact, a real look into Wilson’s everyday life, no bells and whistles, just a candid, voyeuristic peek. The scenes are nicely tied-in with interviews of Wilson talking about her thoughts on her life’s daily events as she speaks straight to the camera directly to viewers at home.

This reality show is sure to do well as long as it maintains it’s naturalness. Some things to look forward to in upcoming episodes: a pantry raid by Dallas, and a behind-the-scenes look at Wilson’s work life on “The Newlywed Game”. Watch it on GSN, starting Thursday, January 14th at 8 pm (ET). GSN’s new hidden-camera show, “Hidden Agenda” follows at 8:30pm.