Tips On A Successful AMERICA’S GOT TALENT Audition – Season 9! 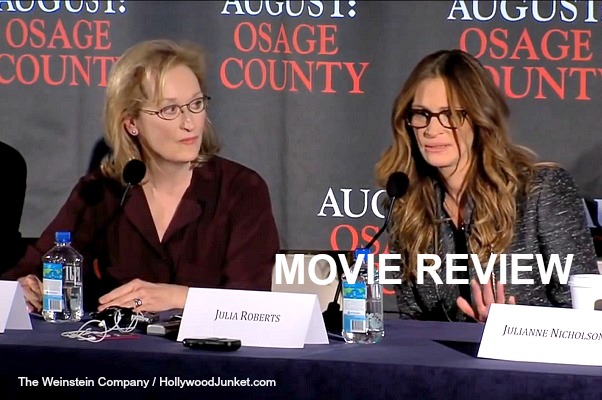 August: Osage County is easily one of the most well acted movies of the year. This is no small compliment in a year full of wonderfully acted blockbusters and independent films.

The black comedy-drama adapted from the Pulitzer Prize and Tony award winning play of the same name written by Tracy Letts, directed by John Wells (Shameless, The Company of Men) has a cast that is led by Meryl Streep and Julia Roberts who have already received Golden Globe nominations for their performances in the film.

Meryl plays the pill-popping matriarch who’s just lost her husband Beverly played by Sam Shepard. Beverly is a former writer who has committed suicide after years of not being able to write anything nearly as great as his past work, being a depressed drunk, and watching his wife become an angry pill addict after her bout with mouth cancer. I’m sure having a female name like Beverly didn’t make his life any easier either. So after his suicide the Weston family comes together for his funeral. When I say “come together” I don’t mean in a nice emotional support way most families do. Just physically. Emotionally they couldn’t be farther apart from one another as they fight, yell, curse, and emotionally scar each other at every turn in the most hilarious and sad way possible. This spewing of words and plates is led by Meryl’s character Violet who is brutally honest at all times but never sees what the fuss is all about because she is just “truth telling.”

On one side the film’s acting is so incredible thanks to the incomparable leads and an ensemble that includes Ewan McGregor, Chris Cooper, Benedict Cumberbatch, Dermot Mulroney, Juliette Lewis, Julianne Nicholson, and a personal fave of mine Margo Martindale that it’s hard to not be entertained. Also the writer Tracy Letts nails the dialogue of each character (hints the Pulitzer and Tony) and the family dynamics are so authentic no matter how eccentric that it’s hard not to be enthralled by most scenes.

On the other hand the film does not have a clear goal and tends to wonder at times which can cause moments of boredom. Even the greatest dialogue and acting can’t save a scene when you aren’t sure if the scene has a point until it’s over. Not having a clear overall goal throughout (besides maybe don’t let Violet’s verbal attacks drive you to suicide as well) did make for an unpredictable story which is rare today but that also works against itself at times because if you aren’t sure where you are trying to go you end up feeling lost. Luckily there were just enough great twists and turns along the way so you don’t have too much time to think all that. Also each character has a secret of some sort and it’s always fun anticipating what will happen when that secret is revealed.

Another great thing about this film is the deep character work. Even though there may not be an obvious major goal for the entire movie that void is filled with every character’s individual goal. The writer and actors make sure we feel the weight of each individual and care about them as if they were our own family members. Also this film is a textbook example of the fact that all great comedy comes from a deep pain inside. The laughter derives from what could be very hurtful and dramatic moments but because the dialogue is so raw and the clever way it’s delivered you can’t help but to laugh your butt off most of the time. The other times it’s so real you aren’t sure if you want to laugh at them, cry for them, or jump through the screen and help them argue but you are sure you feel something inside at all times which is the true mark of a great film and great acting.

Hands down the best scene of the film takes place directly after the funeral where Julia Roberts character Barbara has finally had enough of her mom’s “truth telling” and the pill addiction that influences it and decides to shut her up and take away her pills once and for all. The verbal fight and the actual physical fight that takes places is a dream sequence for the audience and actors alike. This scene alone is worth the price of admission and as incredible as Julia and Meryl are in it again even the supporting actors all find ways to shine here as they do for the entire film.

Something about this film and its characters stick with you as you walk away from the theater and might even make you put into perspective your own family and say “Hey maybe we aren’t that crazy after all… Could be worse!” That something is without a doubt the acting. If I was an acting coach I’d simply show my class this movie every day until they could reenact the scenes close to the level these fine actors did. I’m not sure how you could but if you somehow managed to forget why Meryl Streep is an icon and Julia Roberts is a legend this film will remind you. I’m sure the rest of the cast will win many a “best ensemble” award too!

4/5 Likes – Excellent movie! Something to tweet about. (Very close to 5/5 – “Timeless” rating but the lack of direction keeps it away from perfection.) Go see it!