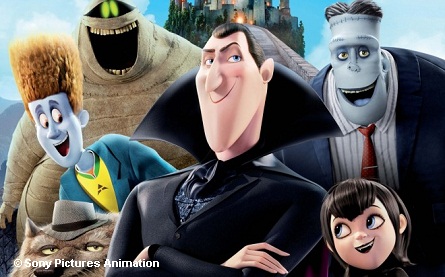 “Hotel Transylvania” is a movie that parents will genuinely enjoy with their children. Though having some plot holes, such as even though Dracula stated early in the movie that he too has kept himself from the outside world away from humans for over 100 years, yet he knows what the word “nerd” means and recognizes the movie “Twilight” when he sees it. Dracula clears up a few misconceptions about vampires – Garlic is not a threat, he doesn’t drink blood – but instead drinks blood substitutes such as “Near Blood” and “Blood Beaters”, Dracula does not say “blah, blah”, and lastly, a stake through the heart is also somewhat of a myth, “who wouldn’t die from that” right? said Dracula. Getting burned-up by the sun – that’s one of the facts of being a vampire. Because of it, Mavis never witnessed a sun rise until she met Jonathan. More Here http://hllywdjnkt.co/QtQNf