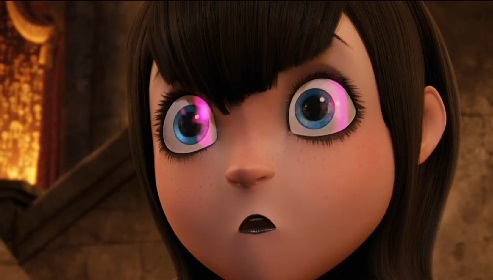 Dracula’s zombie workers disguised as humans scare Mavis away by using fire and threaten to kill her. Her curiosity of humans is put to rest by the experience. But, when she meets a mystery young male drifter named Jonathan who stumbles into the hotel claiming the identity of a party planner for her birthday who is Frankenstein’s cousin – John Stein, Mavis feels a certain “zing” with him that she just can’t shake. At the end, his true identity is revealed in the worst way – under the scrutiny of the hotel’s monster guests as well as Mavis who is hurt by her Father’s betrayal but is fascinated even more by Jonathan. However, upon Dracula’s wishes Jonathan exits the hotel to continue his travels. Dracula says, “I want to kill him. But it would set monsters back hundreds of years”. More Here http://hllywdjnkt.co/TJGKqf