EVERYBODY GETS ONE: GSN Gadget Game Show Pilot!

AMERICA’S GOT TALENT: In Los Angeles!

MOST POPULAR’: BBC Host Graham Norton Back In America!

EVERYBODY GETS ONE: GSN Gadget Game Show Pilot!

I recently attended a new GSN game show run-through. The show gives away gadgets, cars, and trips by the well-known “Dr. Gadget” (Dave Dettman) – most popular for his appearances on shows like “The View”, giving away products to “everybody” in the studio audience. The host of the show was filled-in by executive producer, Scott Sternberg (“Catch 21”). Note: It was reported that this show is still in its pitch stage to a network, GSN being the first. 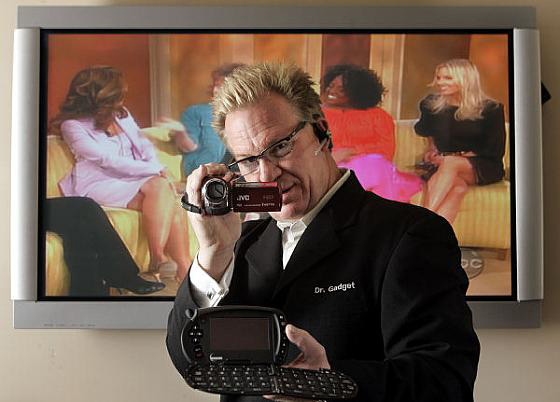 This game show was written by “Dr. Gadget” himself. He describes it as “a cross between ‘Let’s Make a Deal’ and ‘Truth or Consequences’.”

“Dr. Gadget” has electronics picked out by him. There are five groups of thirty people (150 people total) separated by different team colors who have to guess the prices of the electronics, cars, and vacations as close to the exact price as possible.

One person from each team takes a guess at one of the five gadgets on a table choosing from multiple choice prices of gadgets. If that member of the team is closest at guessing the real price, that team gets to guess another price for another gadget.

Whichever team guesses the right multiple choice price gets that prize for their team. Everyone on that team wins the prize!

The set wasn’t a real set. It consisted of cloth-covered tables where the gadgets were placed.
Contestants sat on chairs while they waited for their names to be called if their team mates guessed prices closest to the actual gadget prices.