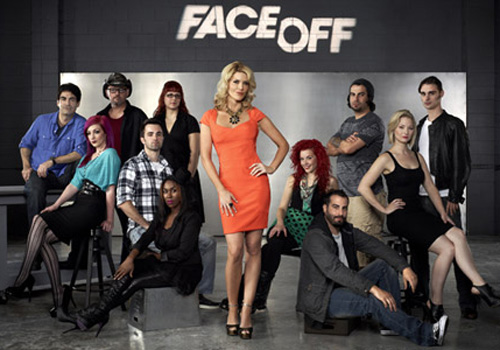 Syfy orginal reality VFX competition reality show, “Face Off” is making it’s third season debut with twelve contestants competing for the grand prize of $100,00. During the audition process, make-up artists must perform make-up on themselves in order to display their talent. Meet some of the contestants below and watch a sneak-preview at the premiere episode where their challenge will be “Star Wars” themed!

Derek and Eric Garcia – Ages 31, from Miami, FL
Derek is a Makeup artist and also a tattoo artist. Eric said that whey they were young, they would set up a coffin in front of their house during Halloween and scare kids as well as slash each slash his brother throat using VFX. Derek loves doing zombies. Eric says they are alike in their artistry and they both love comic books which they got the love for from their father.

Tommy Pietch – Age 26, Columbus, OH
Pietch says he went to Comic Con to compete and wasn’t ready at that time, “I’m a mid west small scale film scene. I’ve only done it for 9 months last year.” Says he started taking classes and has found a technique that works.

Sarah Miller – Age 29, from Goshen, IN
“It’s pretty common that at least one weekend of every month is taken with a make-up job,” said Miller. She has a regular job which is why she doesn’t do more makeup. Miller says she is strong in prosthetics and sculpting, but needs improving on beauty and fashion makeup. Her passion is prosthetics and creating creatures.

Preview of the premiere episode of “Face Off” below:

Nicole Chilelli – Age 28, from Sacramento, CA
“I’m amazing and you need to put me on the show” said Chilelli during her audition. She says she recently got her dream job at MAC and “they are actually artistic at MAC”. She didn’t want to be “a painter on the side of the road”. Chilelli claims that the only TV show that she watches is “Face Off”.

CC Childs – Age 30, from Atlanta, GA
Childs works for MAC cosmetics and works as a freelance VFX artist. Childs gets emotional when talking about why she’d like to be a contestant on the show. Her struggle to get into the makeup artist union motivated her to apply to go onto the show as well as her Father’s support.

Alana Schiro – Age 20, from Staten Island, NY
Schiro is a colorful girl. She says “I’m 20 years old and here’s an opprotunity to win $100,00. If you were 20 years old and good as some sh–, wouldn’t you do it?” She also says that she doesn’t like being told what to do. Schiro likes working with her hands and is confident in painting.

Jason Milani – Age 24, from Hopewell Junction, NY
Miliani says he’s been free-lancing as a VFX artist during the past year. Milani also performs on Broadway. He is interested in incorporating fiber optics into his artistry and likes creating aliens.