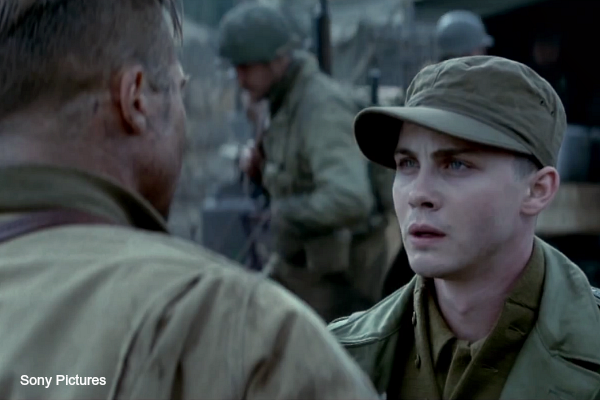 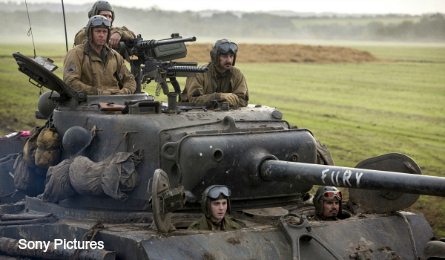 “Fury” film was really shot on film. Editor Dody Dorn said it was shot on 35mm film with an anamorphic lens. This was quite evident, aside from the look of the movie, when at the particular screening where the Q&A took place, the beginning of the film showing there was clearly a large scratch in the film at the bottom. The movie was shot in England for five months and the cast and crew worked through holidays and hiatus. 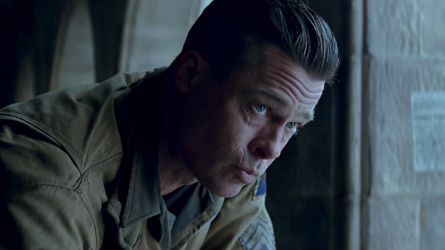 “Fury” is the name of the Sherman Tank in which the cast of characters – Boyd ‘Bible Swan (Shia LaBeouf), Trini ‘Gordo’ Garcia (Michael Peña), Grady (Jon Bernthal), Norman Ellison (Logan Lerman), fought the Germans in during a short period of time in April 1945 lead by Don ‘Wardaddy’ Collier, portrayed by Brad Pitt. The newly, and youngest soldier of the team, Norman, freshly transferred from a comfy office where his job was typing 60 wpm, was thrown into the crucial job of driving and firing from the tank as an “assistant driver”. 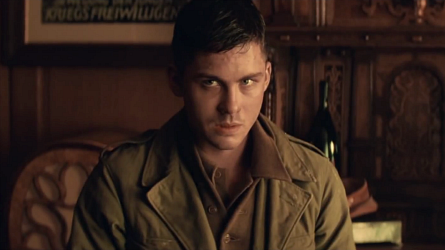 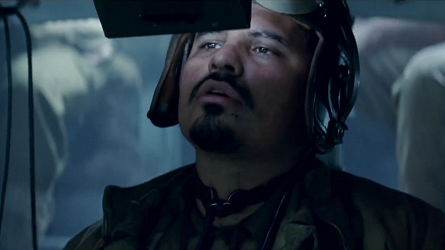 The film shows the innocence and naivety of Norman being sculpted into a tough, ruthless, soldier after experiencing love and loss, as well as immoral acts from the Germans in such a small amount of time. Soon, their fate becomes sealed due to restrictions from Fury that are beyond their control. The result so impressive that the battle, fatal for most of the crew, could be considered a victorious one. “Fury” is a wonderful survival story, as well as a very human story. 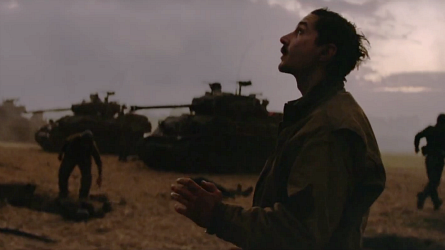 One of the most notable scenes in “Fury” came during a sit-down meal with German enemies in which Labeof’s character reflects the activities with tears streaming from his eyes about his memory of “D-Day”. Collier is angered by the buzz-kill of the story. Earlier in the film, Collier reflects to Norman that he had been fighting the Germans for years -starting in Africa, and now “killing Germans in Germany.” 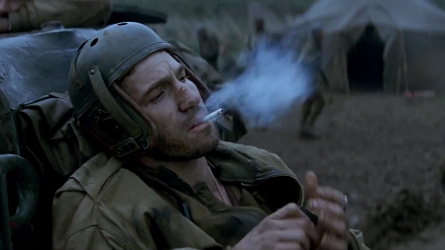 During a Q&A session following the showing of “Fury” in Beverly Hills, actor Lerman, most recently known for “The Perks of Being a Wallflower” said the first entertainment job he did was a doll commercial. He said, “I had to get in a pool and play with a doll.”

Sound designer, Paul Ottosson, has worked on some dark films including “Zero Dark Thirty” and “The Hurt Locker” both of which he won Oscars for. But, most people will never guess which film, along with Fury, currently playing in theaters that also displays his work – “Penguins of Madagascar.” Ottosson said it is the first movie that he could actually take his child to go see, and she joined him at the movie’s premiere.

“Fury” editor Dody Dorn, worked with director David Ayer on three other films, one being “End of Watch.” Dorn stated that she likes to work on movies that are ‘editorial self-conscious”. She also said “David has the most unique approach for getting actors ready for their roles.”

Lerman confirmed Dorn’s comment by telling the movie audience that preparation for the role included visiting real forts, talking to World War II veterans, and fighting every day (with Brad Pitt) physically. Ottossson said that during the scenes where the actors slap each other, “every hit you hear in the movie is real”. They also fired real fire.

Lerman said he “fought for the role” of Norman. There were a lot of other young male actors in the running. He said he stayed in contact with Director Ayer after his audition, and would randomly run-in to him, as well as phoning him. A bit of stalking going on there! The tactics proved to work for the actor.

One movie goer asked Ottosson which sound that he created for the movie was the most surprising to create. His answer was when he used Frisbees with whistles on them. He said that the sound was used when lead actor Brad Pitt (Don ‘Wardaddy’ Collier) was hearing fire coming. “It was the most frightening sound for the men, and (in reality) ended-up being kids’ toys.”

While acting in “Fury”, co-star Logan Lerman said the actors had a lot of flexibility with the scenes. He said there was a lot of improvising. How was that for editor Dorn? She said it was fine as long as it was improvising that was instructed via director Ayer! Dorn recently won “Hollywood Film Award” for editing for her work in “Fury.”