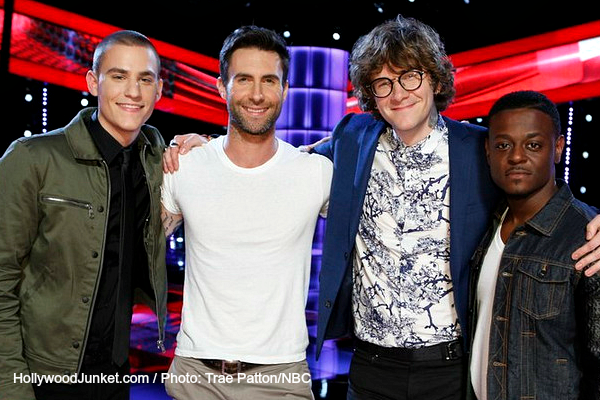 Team Adam’s Christina Grimmie from season six returned to open the show. Grimmie announced that she will be going on tour very soon and has been busy writing. Watch out for some new material soon from her.

Last night Adam said “Big challenges lead to big rewards”. Adam said “at this point, half of 8 if four. The bottom four, is not really the bottom four.” Gwen said she was so proud of her team. “The work so hard and they are so different. She said Taylor is teaching her, and Ryan is listening to her and learning. Pharrell who is getting his star on the Walk of Fame this week, said “more than my name should be there, it’s all the people that have inspired me.” He said what makes DaNica and Luke special is that they are different and they are not what you expect. He also said working with them is so easy, and they know what they want to do. Blake, who was tough on Craig this week, said he feels a ton of bricks and wants it more for Craig than for himself.

The next artist announced to be saved was – Damien from Team Adam!

After some clips of what life is like for “The Voice” contestants offstage, former ‘Voice contestant RaeLynn from Team Blake (season 2) performed.

RaeLynn thanked her country fans and said she’s been hanging-out with her former coach Blake Shelton. Blake said RaeLynn is so important right now because Country music doesn’t have a lot of female stars right now.

Next, Daly brought the contestants back out to the stage to reveal the next saved artist. It was Taylor John Williams from Team Gwen! After the break, the next artist announced as saved is Craig Wayne Boyd! That means the bottom four were Danica Shirey, Ryan Sill, Chris Jamison and Luke Wade who had to peform for America’s Instant Save Twitter votes.

Blake reacted to hearing the news about Craig being saved, said he’s not surprised and he is surprised. “The fact that I just saw four of the most talented people be in the bottom three and have to perform (for their life) is crazy to me.”

DaNica Shirey was up first and sand Etta James “I’d Rather Go Blind” for the Instant Save Vote. After her performance, Pharrell said the audience “saw that, they heard that and they definitely felt that.” He said DaNica “deserves to be here” and that he promised to be involved in her “super-bright future”.

Luke Wade performed “Stand By Me” for the Instant Save vote. Pharrell said “America saw you” and again stated “everyone felt that”.

Ryan Sill from Team Gwen sang “We’re in Heaven” by Bryan Adams. He was saved the last two weeks in a row, Gwen responded that he keeps getting saved because he’s so good. She said he gets better every single time that he gets on stage.

Chris Jamison sang “Georgia On My Mind”. Adam’s reaction to Chris being in the bottom was “tonight losing is a huge part of winning. He’s not in the Top four, but he’s in the Top 5.” Adam said Chris is “a monster” and “there’s no kid that deserves more.”

Chris Jamison was at 50% of the votes when the show continued from the commercial break. Blake said it’s hard to justify any of them going home, and that it would be cool to have a girl in the competition. But, Ryan has mastered winning the Instant Save votes. The winner of the Instant Save was Chris Jamison! That makes Team Adam’s team unscathed with all three of his artists moving on to the Top 5! Also, with that voting result, Team Pharrell is officially out of the game. 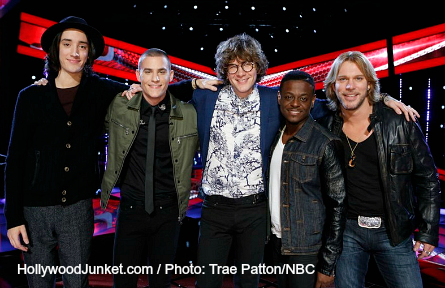