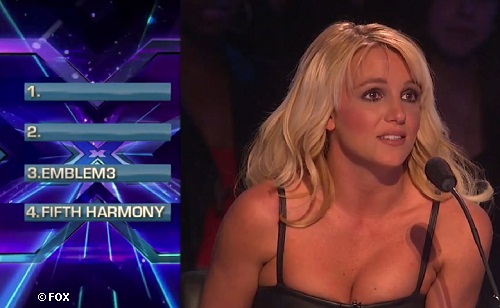 Hosts of “The X Factor USA” Mario Lopez and Khloe Kardashian-Odom, reminded the top six acts that eliminations are just around the corner for them. Mario needlessly reminded the acts, “The top six acts will have an excruciating wait.” The final four acts who are staying tonight will head to the Semi Finals next week.

Melanie Amaro:
A special ‘X Factor treat was a performance from last year’s winner Melanie Amaro who landed onto the stage via atop a high-raised podium where she was slowly descended down onto the actual stage. Amaro sang her new single called “The Long Distance.”

When Mario asked Melanie what life has been like since winning “The X Factor USA” she said, “I have tons of wonderful people that just love me and take me in.” Mario said, “You get recognized a lot.” She confirmed that, that is indeed the case. Then, while Melanie was thanking the mentors, Mario started talking over her and didn’t stop. Viewers could not hear what she was saying to the mentors.

The Acts:
A bit of background information on one of the current acts who is Carly Rose Sonenclar is that “Black Bird” by “The Beatles” is the song that her father used to “blare in the household” she said, and that song made her want to be a musician.

Listen to “Black Bird” song below:

The mentors returned to the stage along with their acts. First to make her entrance was Briney Spears with “Teens” Carly Rose Sonenclar and Diamond White. Next was LA Reid with “Over 25s” Tate Stevens, followed by Demi Lovato’s “Young Adult” CeCe Frey, and last Simon Cowell with “Groups” Emblem3 and Fifth Harmony.

Lowest Number of Votes:
The act with the lowest number of votes is first cut from the competition. That act was CeCe Frey. She said, “I’m very proud of everything that I’ve done on this show. I hope I taught everyone at home to love who you are. The more you love who your are, the less you need other people to love you.”

Demi was shell-shocked and said, “I haven’t had time to react or I’d be balling my eyes out right now. She then started to sob a bit and said to CeCe, “I’m just so proud of you.” CeCe said that she’ll miss Demi the most along with the rest of the competitors – referring to them as “everybody behind me.”

The remaining acts were: Fifth Harmony, Diamond White, and Tate Stevens
Next act going into the Semi Finals – Tate Stevens

The Bottom Two Acts:
The bottom two acts were Diamond White and Fifth Harmony who had to prepare to sing for survival to fight for the last spot in the Semi-Finals. Mario asked Diamond “how you feeling? What’s going through your mind right now? Diamond answered, “Just my song and focus on killing it and just happy to be in the top five”- I think she was talking about last week’s Leaderboard.

“Fifth Harmony” said, “We are just going to bring it as best as we can . That’s all we can do.” Khloe asked Diamond he she felt like she has an advantage because she had to sing for survival last week. Diamond responded, “Really can’t have advantages. I just want to sing my heart out.” She said that she hoped that the judges would see it and keep her. Fifth Harmony said “we’re just going through our song..just praying this works out for us.”

The next performance of the night was by Kesha who wore a sexy black sparkly one piece lingerie type outfit.

Survival Performances:
Then it was time for the survival performances by the bottom two acts. Simon’s act was up first. He introduced them with “”First up – they are going to be amazing because they are amazing – Fifth Harmony”

Next, Britney Spears introduced her act to “The X Factor” fighting stage, “This is the girl next door that sings like an angel – here’s Diamond White”

It’s Voting Time:
Simon – “I want to congratulate both artists for what you did. I know I’m biased. Diamond you’ve been in the bottom two before and Fifth Harmony has not. I am voting for Diamond White.

LA Reid – As an impartial judge, he stated, “again I congratulate both of you. Your are all so lovable. I wish you weren’t loveable because you make it so much tougher. The act that I’m sending home.(pause) It’s so unfortunate…is Diamond White.”

Demi – I also want to say to every girl on this stage tonight, you have come so far. Individually you have careers that have been made on this show that will last after this show regardless what I decide. The act that I’m gonna send home is Diamond White.”

Diamond took the news like a professional and did not cry or show any ill will towards the mentors. Mario said that she was “classy”. Diamond’s last words were “I’ll be back on The X Factor stage performing my hit song.”

Britney’s parting words of advice to Diamond was, “I think you are so young and the future is ahead of you. The world is yours.”

The Leader Board Results:
Mario asked LA Reid how he was feeling about this week’s Leader Board. LA said, “I’m going to be one of the three with my guy” (referring to Tate Stevens). Mario had a hard time following because he responded with “there are four”. But, then LA didn’t catch that it was only possible for his act to be in the top three anyway because the fourth spot defaults to the winner of the survival song round.

Mario pointed-out to Simon that his acts keep consistently come in at the number three spot. Simon said “As we have seen, you never know what’s going to happen in this competition. I still have a feeling that we have a chance at winning this.”

Carly Rose Sonenclar lost her number one spot which she had held for the past two weeks to Tate Stevens when he was announced as this week’s winner. Tate reacted by acknowledging the fans and the viewers first, then the mentors. He said, “Its’ amazing. Thanks to you guys at home for picking up the phone. Thank you to you guys (to mentors). This is great. Amazing.” LA said he was “really, really happy” and that he plans to bring bigger things coming up in the competition for Tate.

One of these four acts will win a $5 million recording contract. “The X Factor USA” continues next Wednesday on FOX.