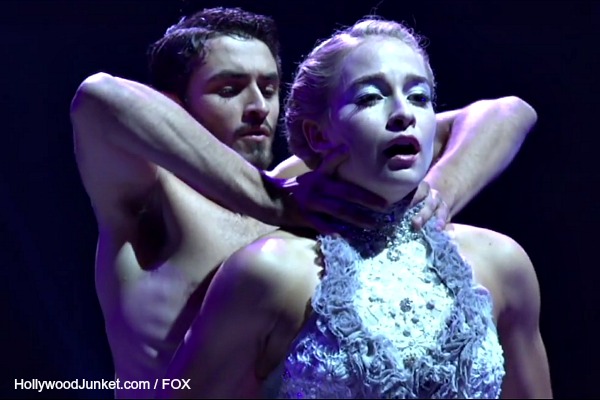 The “So You Think You Can Dance” (SYTYCD) Top 20 dancers were paired-up with partners of their same or similar dance styles to showcase their best dance capabilities to judges and fans. There were no eliminations this week, but the voting was opened at the end of the show to determine which two dancers will be leaving the SYTYCD competition next week.

Hosted by Cat Deeley, this week’s competition was judged by resident judges Nigel Lygoe, Mary Murphy, and guest judge Jason Derulo who is a singer-songwriter and dancer himself. His famous significant other, Jordin Sparks of “American Idol” fame was seen in the audience supporting her beau, and keeping him in check as he complimented the ladies. There weren’t a lot of negative comments from the judges. They noted minor issues, but overall praised the contestants’ techniques and styles.

The dancers whose styles include: jazz, tap, ballet, contemporary, hip-hop, Latin ballroom, ballroom, and one popper in the bunch are all competing for the grand prize of $250,000, a cover on Dance Spirit magazine, and a lead role on the Broadway show “On the Town”. The Top 20 dancers made their debut onto the SYTYCD stage with some excitement and a lot of nerves. Next week, they’ll have bigger challenges to face when they change partners and dance new styles. Wednesday night’s performances showcased two creatively paired same-sex dancers that were some of night’s best routines. 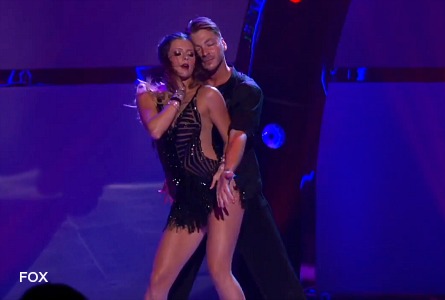 Before each duo went out onto the stage, they had to reveal eight seconds of little-known facts about themselves to each other. The first brave pair of the night was Brooklyn and Serge. Eight-Second Reveals: Serge said he’s obsessed with cheese. Brooklyn said she loves watching shark movies. Hmm…I guess we know where she stands with “Sharknado” movie! After they performed a Latin Ballroom dance choreographed by previous SYTYCD season 2 contestant Dmitry Chaplin. When it was over, Jason said he’d like to add them to his show. Nigel said, “great opening to the show” and that “the whole world was uplifted.” Serge was someone who tried-out for the show previously, and is experiencing the Top 20 for the first time. He said that all his hard work and efforts are finally paying off. 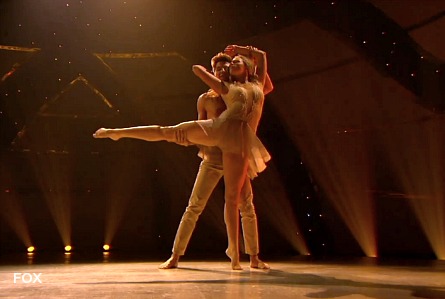 Emily and Casey were next. Eight-Second Reveals: Casey revealed that he’s a huge Disney fanatic, and terribly afraid of being choked (aren’t we all!). Emily said she owns 15 fedora hats. Their style is Contemporary and the danced a number that was choreographed by Travis Wall, runner-up of SYTYCD season 2. Jason’s comments included “I did not want that to end,” and “that was an amazing story.” Nigel agreed when Jason said “sometimes it’s not about the technique, but the emotion.” Nigel said, “but when you put the technique with the emotion..” Mary approved as well, “it was a beautiful love story,” and she called Casey’s leading style “yummy!”

VALERIE, ZACK – Stepping Up & Down! 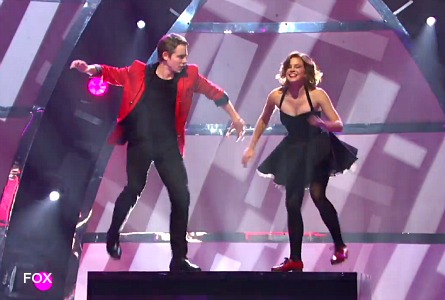 Eight-Second Reveals: Zack said he listens to “hood rat music” and hates cereal. Valerie was born on Valentine’s Day and is obsessed with pigs. They are two tap dancers, and their choreographer added the extra challenged of them tapping up and down stairs. After they pulled it off with grace, Nigel commented, “Wow, wow, wow!,” and said it’s like drummers – “you get so many different sounds out of tap.” Only three of the Top 20 are tap dancers this season. Mary called Zack a genius, and told Valerie that she took her back to a different era. Jason, who said he’s also a tapper said, “that was unbelievable.” 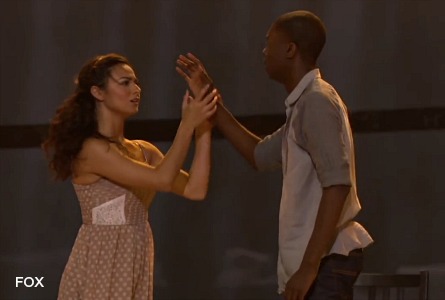 Eight-Second Reveals: Stanley says he changes his hair color quite often. Bridget collects peacock feathers, but is not a hoarder! Their contemporary dance, choreographed by Bonnie Story, whose daughter competed on SYTYCD season 4, earned them such comments as “They told the story perfectly” by Mary. Jason thought “it looked effortless…we felt like we were part of the story.” Nigel commented, “It was tremendous. Your classic technique was fantastic. Beautifully done.” 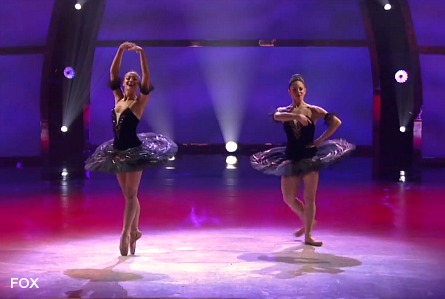 Eight-Second Reveals: Jourdan said she likes pistachios. Jacque is obsessed with kittens and drinks pickle juice. These two ballet artists performed “Pas Deux Black Swan”. Jason joked that he has a “point” background. No one took him serious. But he did say “beautiful. I loved it” to the girls. Nigel and Mary both stated that they were beyond thrilled to see ballet being performed on the SYTYCD stage. Mary said they “looked like sisters who’ve been dancing for years,” and she is “proud and honored” to see their ballet.

MALENE, MARCQUET – A Force To Be Reckoned With 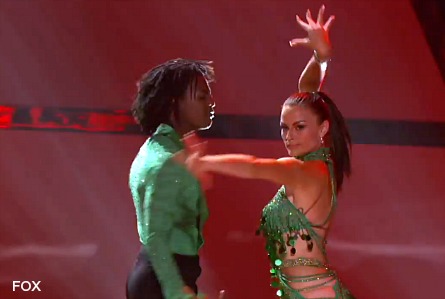 Eight-Second Reveals: Marcquet is “deathly afraid” of ants. Malene wants a tiger as a pet. They danced a Brazilian Samba choreographed by “Dancing With The Stars” (DWTS) choreographer Louis van Amstel. Nigel said “this is DWTS and SYTYCD coming together.” He was happy to finally get one of DWTS great choreographers because they (DWTS) “keep stealing our great dancers” Nigel fumed. But, found Malene to be “waiting to dance” he told her. She held back too much. He said Marcquet “is a force to be reckoned with.” Mary said, “amazing. Wow!” They didn’t get on the hot tamale train, but “someone was cooking in the oven. It was hot rolls!” she exclaimed to them. She said Malene was “full of fire and beauty” and that Marcquet is an amazing partner. Jason told them “you showed us how it’s done.” 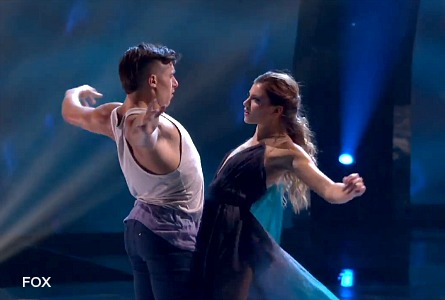 Eight-Second Reveals: Rudy said he’s a Cuban redneck. Carley said that she used to wear a T-Shirt everywhere. Their style of dance is Contemporary. Stacey Tookey choreographed their routine. The judges were very pleased by their performance. Mary stated, “that passion just poured out all over that stage.” She told Rudy that he has so much heart. “It was really special” she said and they she sees them in a different way. Jason said “when the music got intense, you guys looked like you got intense.” He’s sure that they won’t be part of the ones going home next week. Nigel agreed, and stated that this Top 20 is the best the show has ever had. He told Rudy that he wears his heart on his sleeve. 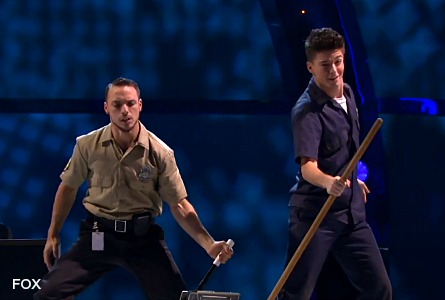 Eight-Second Reveals: Teddy sang that he’s a Taurus among other things. Emilio said his weakness is Hispanic women. They are hip-hop dancers whose moves and styles were meshed together by choreographer Christopher Scott. Their number was one of the more memorable ones of the night. They danced to The Commodores “Nightshift” dressed as a janitor and a security guard. Jason commented, “That was super-dope, how you meshed it together and made it look like one. It was seamless.” Nigel said “Emilio’s tricks are fantastic,” and Teddy taps as well. So, he is looking forward to what they will bring to the stage in the future. Mary said she loved the way Christopher used the music and that it was “mesmerizing.” 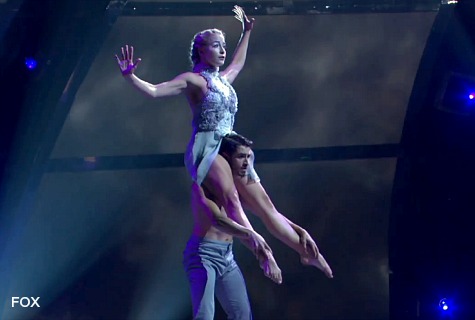 Eight-Second Reveals: Ricky said he loves to shop at thrift stores and loves to “power-nap” in his fee time. Jessica said she believes that Mermaids are indeed real! Sonya Tayeh choreographed their Contemporary piece that was the talk of the night. This is the SYTYCD dance that I remember from the show’s early seasons. Nigel remarked “it’s really important that America understand that this is another level entirely”, and that Ricky reminds him of ‘The Hobbit’. But overall he said it was one of the best routines he’s ever seen. Mary said, “that just came from Heaven. If everyone out there didn’t feel connected, there’s something wrong with them.” Mary noted that it’s scary to think that Jessica almost wasn’t in the Top 20 when she had to fight to stay during the Pasadena rounds. Mary finished with that their performance “was the best of the night for me.” Jason said he wasn’t sure what was wrong with him, but it was because he was holding his breath during their performance. 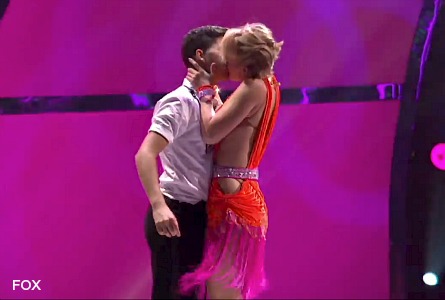 Eight-Second Reveals: Nick loves his dog and says he’s the best dog in the world. Tanisha said she burps like a man and is allergic to Chlorine. That’s right, she can’t swim! These ballroom dancers danced the Cha-Cha choreographed by Louis van Amstel. The judges didn’t have much time to comment in order to wrap the show up in time. Nigel said it was “tight”. Mary said “amazing”, and that when Tanisha kissed Nick, she “hit it hard”. Nigel also added that they were “tremendous”. Jason agreed with Mary that “they hit it hard.” Nigel came back with the last words – “they were bloody great!”

Fans can vote for their favorites 20 times max via the show’s website http://www.fox.com/dance/ or their show’s App, SuperVoteTM via the FOX NOW App Voting on Facebook.