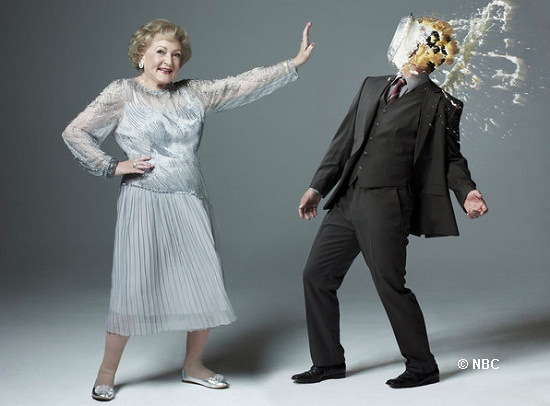 Betty White’s hidden camera show, “Off Their Rockers” returns to NBC for a second season. This time, the Senior Citizen cast of pranksters welcomes celebrity guests that include Kim Kardashian, The Housewives of Beverly Hills, Howie Mandel and Psy of “Gangnam Style” fame.

In an NBC interview with Korean songwriter and singer Psy, best known for taking America by storm with “Gangnam Style” YouTube video, was so excited to have done a skit with Betty White. He stated that in the skit, he had to show the older crowd how to properly “Gangnam Style”, which is not only his song, but also a dance. Psy said that White was trying hard on the proper pronunciation of the word “Gangnam.”

His skit is about the cast members of “Off Their Rockers” trying to make a viral video of Gangnam Style”. He said so Betty brought him to suggest he shows them. But, they said that they don’t need his help and send him away.

Psy also said that hidden-camera shows used to be in Korea but they don’t have them anymore which is why he is especially excited to be part of “Off Their Rockers.”

Howie Mandel, host of “Take It All” game show and judge on “America’s Got Talent” said that he loves hidden-camera shows and Betty White and that this is a “bucket list” to have been on the show with Betty White. He also credits classic hidden-camera show “Candid Camera” with Allen Funt as inspiration of his comedy career.

In Mandel’s skit on “Off Their Rockers” he explains premise as, “Betty has called attention to my germaphobia in this episode and she’s trying to accommodate in a way that only Betty can and hopefully the hilarity and laughs ensue.”

“Off Their Rockers” season 2 premiers on Tuesday, January 8, 2012 on NBC. Psy will guest star in the first episode at 8:00 p.m. ET, while Kim Kardashian will be the special guest in the 8:30 p.m. ET episode. Other guests this season include: Nicole Richie, Steve O, Nick Lachey, NeNe Leakes, Ed Asner, Nick Cannon and Bob Harper.