IT’S WORTH WHAT? Host Cedric The Entertainer Explains the Game!

RISE OF THE PLANET OF THE APES: New Sneak-Peek at the Human Side!

IT’S WORTH WHAT? Host Cedric The Entertainer Explains the Game!

NBC’s new game show which seems to be a spin-off from familiar price guessing games from classic game shows such as “The Price is Right” and “Let’s Make a Deal” is called “It’s Worth What” and is hosted by actor and comedian Cedric the Entertainer.

During a press conference call today Cedric gave us more insight into how the game is played, and why a contestant passed-out on-stage during filming. 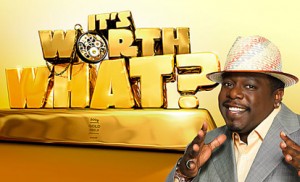 Game Show Host with Answers:
His first time hosting a game show, Cedric stated that there are times when he knows the correct answer before the contestant and has to hold himself back from giving it away. Cedric stated, “I get the answers in the nick-of-time. Only if it’s necessary for me to know the answer. I’m usually finding out with the people. The fun thing is to be playing along”.

In the final round, Cedric stated that contestants can win up to ten times their bank amount. In this final round, the contestants are given four collectibles (or “expensive items”). Then Cedric brings out four collectibles. Contestants must match their most expensive over his most expensive item. They keep doing this one at a time. An example that he used was: If he brought out a corvette and gave the contestants a diamond ring. They have to decide if the diamond ring will be more than the corvette. Then, if it’s more than his Persian rug.. and so on. They win their bank if they are successful. If they keep playing, they have to put another item over the corvette and keep finding more expensive items over the corvette until they win ten times their bank.

Cedric said that there were contestants that walked away with their bank of $100,000 and didn’t want to risk it.

Contestant down!
When asked about the contestant-down in question who apparently had an on-stage anxiety attack at the same moment that a tiger was brought onto the stage. Cedric said that “the tiger was a sweet-heart and in a cage. The contestant got overwhelmed and was looking for the right answer. She wasn’t breathing. It was a little warm.” He said that she was there with her son and hopes to see them both return if the show gets picked-up for a second season.

“It’s Worth What” premieres on NBC Tuesday July 19th.