JEFF WHO LIVES AT HOME: Movie Reveiw- Destiny Calling in a Basement! 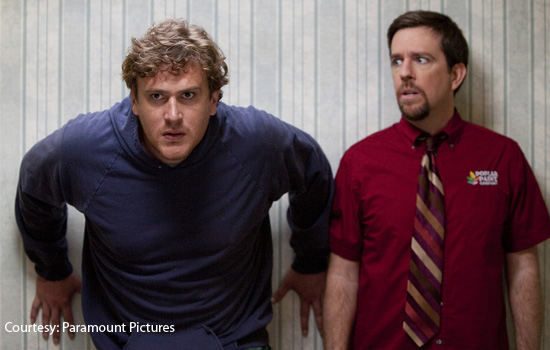 A movie made by documentary film makers is a glimpse inside the life of an underachiever named Jeff, played by Jason Segel (How I Met Your Mother, Bad Teacher, The Muppets) shot in a documentary, voyeuristic style and at times very similar to television show “The Office” with incremental zoom-ins on character’s reactions.

In a recent press conference, the stars and brother directors Jay and Mark Duplass talked about the techniques used in the making of this film. “We shoot documentary style and let our actors come to us. But you have to plan it” said Jay. 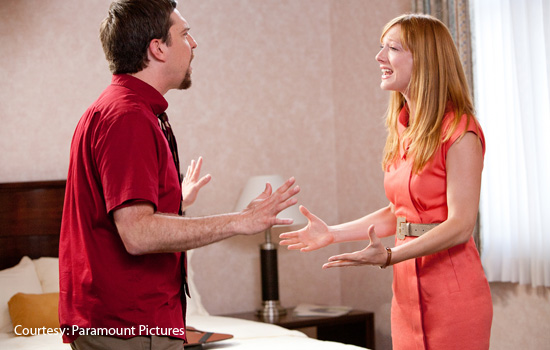 When describing how the two work together, Mark stated “whatever problems end up coming up between us immediately get dwarfed by the greater force of the movie that we have to deal with. You know, it’s like that moment where there are two villains who hate each other and then they have to join forces to defeat the bigger villain.” Jay added, “It’s like Frankenstein. You make a movie and it’s like this big monster that threatens to ruin your life, and eat up all of your food and your fun”.

Star of the film, Segel said about the movie’s script, also written by the Duplass brothers, “It was just so well written. There was no need to talk about what the character’s motivation was or anything like that. It was nice work.”

Director Mark Duplass said the movie was partially inspired by an area in Austin where he and his brother once lived. It was the zip code 78704 in South Austin he said where there’s a group of people living off of $4,000 a year and “theorizing about the nature and the universe while wearing basketball shorts and hoodies and smoking a lot of pot.”

What makes Jeff’s character so wonderful is that he is “waiting for glory” said Mark. “He has sacrificed a lot to look for that big thing that we all want. He won’t settle for just a decent job and maybe the right girlfriend. Jeff is waiting for glory and that’s what we love about him”.

Though the story takes place in Baton Rouge, it was actually filmed in New Orleans. The directors shot as much as they could in chronological order. Actress Judy Greer who plays Linda, Jeff’s sister-in-law whom his brother Pat (Ed Helms) suspects is cheating on him, stated that during filming, “It felt really seamless to make this movie”, and working with the two actors playing brothers Pat and Jeff “felt really comfortable. Their bond was really amazing”.

Segel said that the whole goal for him is “just being natural. To be really regular. I don’t think if it’s a comedy scene or a drama scene”. Jay added, “Everything that we do is based on character goals. These characters are forced to sit in chaos”.

In regards the the freeing style of shooting, mostly improv, actor Ed Helms stated that “It’s the most fun way of going onto set. Not knowing what you’re going to say…it’s really fun, so exciting. Even the most inane scenes like sitting in the tub with Jason”. Segel also commented, “the only preparation was understanding what the point is”. Mark said that with their style of shooting the scenes, the actors “never know if it’s a wide shot or a close-up, ” and they don’t stop shooting until the scene is done”. They are able to shoot this way because they don’t bring the actors in until the set is completely lit. “We don’t stop to reset shoot… you lose the moment”.

Mark also said that they don’t do rehearsals. “We don’t believe in the rehearsal process in this instance because you might lose something that you don’t get.” The two directors said that their films focus heavily on bringing-out the natural human drama and emotions. So, we asked Mark if he and his brother ever considered getting into the reality television business. Mark stated that they haven’t and probably never will. However, he said he is a big fan of “The Bachelor” reality dating show. He confesses to having “The Bachelor” viewing parties every Monday night!