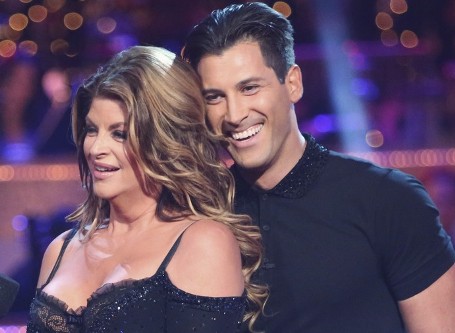 Funny woman, Kirstie Alley was eliminated on tonight’s episode of Dancing with the Stars. Last night she and her partner, Maksim Chmerkovskiy teamed-up with Tristan MacManus to dance the Trio Paso Doble. The men were dressed as black angels where as Kirstie wore all white. This dance routine did not suit Kirstie well; it was rather dark, serious and boring. It was easy to see she was not her usual bubbly self while she was performing. Carrie Ann said the performance was “I loved the costumes but the performance was alittle sloppy”. Bruno said “It was a bit surreal, it was like watching the valley of the dolls, you always give a surreal interpretation of anything you do”. Kirstie and Maksim received a total of 79 for the combined two weeks of performances.

Gilles Marini and his partner, Peta Murgatroyd collaborated with Chelsie Hightower for their rendition of the salsa. The two ladies wore matching outfits while Gilles flaunted his chiseled physique by wearing his shirt unbuttoned. All three of them looked like they were having a great time on stage. Bruno said: “Gilles manaja twa seems to come natural to you, the French invented it but you can handle it well”. Carrie Ann said”, I loved how you came out and took control over the dance floor”. Len Goodman commented saying, “You exposed yourself you did not hide yourself behind these two”. Gilles and Peta received a total score of 92 for the two weeks.

Melissa Rycroft and Tony Dovolani teamed up with Henry Byalikov to perform the Paso Doble to Adele’s hit song, Rumour Has It. The three did an amazing job at sharing equal stage time along with one another. Len Goodman commented saying, “Seamlessly you were like a Frisbee being tossed to Tony and Henry, of all of our celebrities, and you impress me the most”. Bruno said”, You are a fantastic dancer, you should make it to the finals”. Melissa and Tony received a total of 99 for both weeks.

Emitt Smith and his partner, Cheryl Burke danced the Salsa with Kym Johnson. All three wore colorful hot green and blue costumes. Emitt had no problem twirling around both ladies at the same time. Carrie Ann commented,”Last week you were in the safety zone but this week you were in the red, hot, spicy zone!” Len Goodman said, “It was like working two yo-yos at the same time, I thought the choreography was very clever”. Emitt and Cheryl received a total score of 92.5 for the two weeks.

Kelly Monaco and Val Chmerkovskiy teamed up with Louis Van Amstel of their rendition of the Trio Jive. Kelly was able to evenly balance the two men throughout the dance. The routine was upbeat, fun and ended with Kelly on the judges table. Len Goodman said,” It had the F factor, it was fun, fast and flamboyant”. Bruno said”. You can easily take the two boys at the same time and you’re always on top”. Kelly and Val received a score of 92.5 for the two weeks.

Apolo Anton Ohno and his partner Karina Smirnoff collaborated with Sasha Farber on the Jive. The threesome got their dance on to one of the most famous songs in cinema history, Grease Lightening, Karina donned a red form fitting outfit emulating Olivia Newton John’s iconic character, Sandy; the two men dressed like 1950’s greasers. They wore white t-shirts, leather jackets and slicked back hair. Bruno said, “You took a huge risk with this because the whole time, you were mirroring a pro but you conquered this brilliantly”. Carrie Ann said, “This was your most vibrant performance, you guys were great together”. Apolo and Karina received a total of 91.5 for the two weeks.

We are now approaching the last couple of weeks of Dancing With The Stars, who will take home the mirror ball? Keep tuning in and keep on voting for your favorite all star.