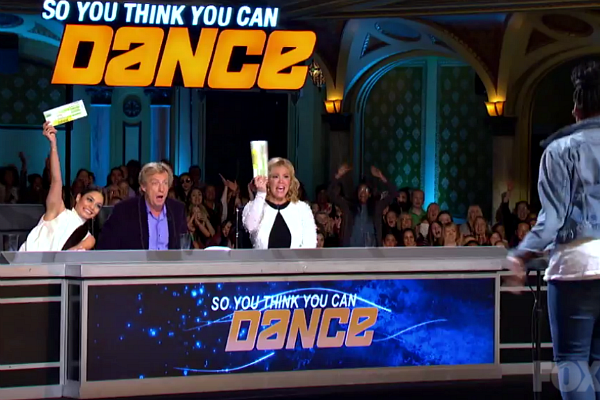 Longtime fans of FOX’s dance competition reality show “So You Think You Can Dance” is back to its traditional age range of 18 to 30 for young dancers. A nice welcome back from last season’s impressive showcase of young talent where most dancers were on average age 13.

There has been a slight change in the judges pool. The panel consists of three judges instead of four this season. When asked if there would be a rotating fourth judges chair (like in past seasons) Nigel wouldn’t comment. The permanent judges this season are Nigel Lythgoe, Vanessa Hudgens, and returning judge (after a two-season absence) Mary Murphy.

In traditional fashion, if the judges are unsure about an auditioner, they send them to round of choreography with “La La Land” choreographer and long-time SYTYCD choreographer and now Creative Producer, Mandy Moore. Once they pass this round, they get a ticket to The Academy where they go through mentoring by All-Stars. The top ten dancers that get selected by the All-Stars move on to the live shows!

For the lucky few who impress the judges right away during their first audition, they get a ticket straight to The Academy. 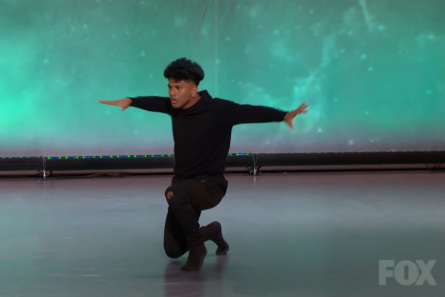 The first audition in Los Angeles was Mark from Honolulu, Hawaii. His mom, who performed Lockin as a street dancer, is deaf. Mark danced break-in-contemporary for his audition. He called it “Therea”, or “letting go and expressing yourself.” Nigel complimented Mark’s signature moves and will remember him for that. Mary said he has moves “out of this world”. Vanessa said he was amazing. Mary put him on the “hot tamale train” and all of the judges sent him to the Academy.

It was the first time that Mary cried over a ballroom routine on the show. Mary commented that it’s not often enough that ballroom dancers get to tell a story. She said that they took it to an artistic level. “When people see two people dance like that, you’re going to get more people to fall in love with ballroom dancing” Mary stated, and that’s why she cried. Vanessa called them “phenomenal.” Nigel observed that it was “one of the best routines in the history of this show.” He also told Kristina that her technique is beautiful. Nigel put them through to the Academy. 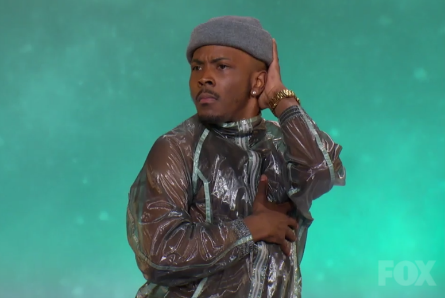 Robert is a violinist who started dancing. Vanessa said she LOVED how fierce and playful he was. Nigel said Robert has a great sense of humor and great creativity. Mary told him that she loved it too and that he’s taking the train to The Academy! 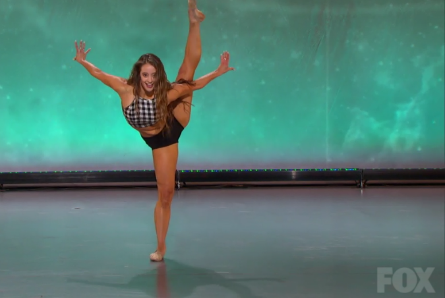 “You’re just adorable and love for dance oozes out of your pores” stated Mary to Alexis. Vanessa called her “a ray of sunshine”. Nigel said, “I only need one word which is Academy for me.”

Luke described his style to Cat Deeley as “eclectic”. He’s been dancing for four years. Luke said he wanted to move to the music. He did a hip-hop number which Nigel predicted would be “the Austin Powers of hip-hop” based on how Luke looked. Nigel wasn’t too far off in his prediction. Nigel told Luke that he’s creating a new form of hip-hop. Mary told him it won’t translate over to the show, but keep doing it.
Vanessa said she’d like to dance with him on stage and would have a great time. Luke invited her up and she had a lot of fun dancing similar to Luke. He later said she is an “okay” dancer!

Darius has an amazing story. He was raised by his single mother who went to prison. After that, Darius was taken in by his Aunt. After his audition, there was no reaction other than screaming and cheering. The judges gave him a ticket straight to the Academy. 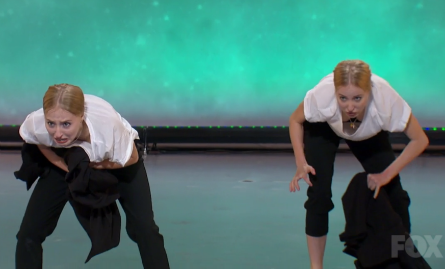 The two women are twins from Russia. Nigel said their routine was beautifully executed. Mary stated it was “the best modern dance audition I’ve seen on the show.” Vanessa reacted that it was bold and breath-taking beautiful. She said she would pay to a show to see that. The twins got tickets to The Academy.

The judges found-out what “triple-jointed” means thanks to break dancers Eric “Frenchie” Bossett and Felix “Bad Bonez” Gomez who auditioned separately. They twisted and contortioned thier bodies and limbs that resembled something out of a horror movie. The judges were weired-out to say the least. 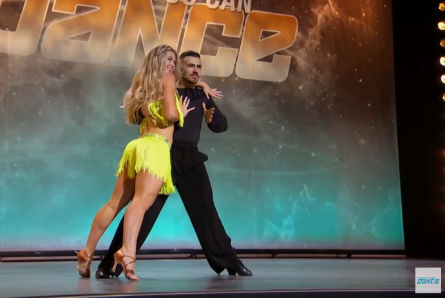 They were first paired to together when Tristen was 12 and Jensen were 11. Jensen’s older sister is Lindsey Arnold who competed on season 9 of SYTYCD and is currently a pro dancer on “Dancing with the Stars”. Mary said she sees great things for them. Vanessa called Jensen “a star”. Nigel said, “it was girls like you growing up that got me into dancing”. The judges sent them to the Academy.

Cody is a three-time world horse riding champion. He said he wanted to pursue his true passion which is dancing. He dances a fusion of Belly dancing and hip-hop. Cody told the judges that he was bullied for being different and gay. Growing up in Texas, he had to do the horse riding while secretly dancing. Unfortunately, Cody didn’t get to the next round. Mary said he doesn’t have enough in his tool shed to have a real fusion of hip-hop and belly dancing. Vanessa said with the proper training, he can improve. Nigel applauded him for coming. They sent him on his way.

Sade came with a great dance pedigree. Her parents choreographed for Michael Jackson and Mariah Carey. Nigel said Sade’s audition was “tremendous”. Mary told Sade she is “on fire”. Mom was invited on stage to dance with her daughter. The judges sent Sade to the Academy. 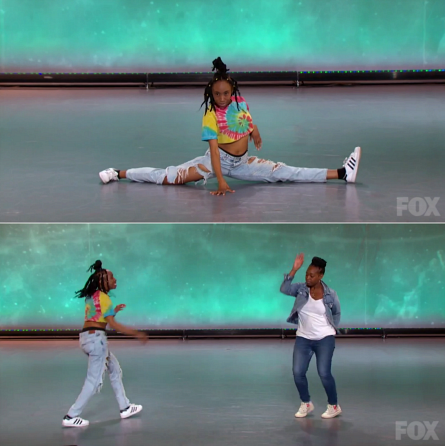 Pictured: Sade Keinu Austin and her with Mom.

It’s the first year the Matthew is old enough to audition for SYTYCD at 18 years old. He started out not likeing dance and cried at dance school from the ages of 2 to 8. He didn’t fall for dance until age 12 while at a performing arts school. Nigel told him, “one of the most outstanding routines I’ve seen today.” Mary called his audition “mind-blowing.” Vanessa said he was “incredible, amazing.” They all said that they wanted to feel more emotion from him. He was sent to the Academy.

Dassy surprised the judges when she started out with a contemporary dance, then quickly went to poppin-and-lockin. Mary explained it as “she went BAM on us!” Vanessa said she liked how Dassy is feminine and masculine. She called her orginial and fun to watch. Nigel said he used to be Shirley’s (the singer in the music Dassy danced to) choreographer and said he knows she would love what Dassy did. Nigel voted to send her to the Academy. Vanessa & Mary agreed. 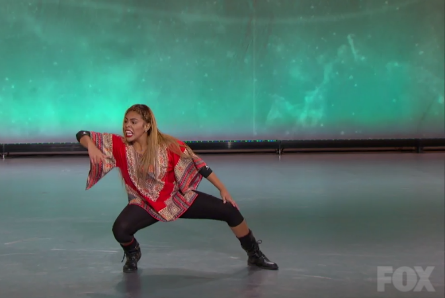 Blessin started to dance in a step dance group. Mary said Blessin dominates with her fire and passion. However, the show would be super tough for her since she’d have other styles to learn. Vanessa said she felt empowered to be a women by that routine, and also loved her passion and drive. Nigel offered to put her team of 22 stepper on the show. The judges sent Blessin to the cherography round. 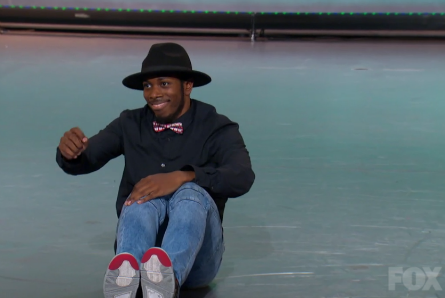 He’s a street performer on Hollywood Blvd. Mary told him his “transitions from one move to the other are out of this world!” She said he has “a lot of vocabulary” of moves. Nigel said he believes that people would pick up the phone to vote for him Vanessa said he did moves that she hasn’t seen. He got his ticket to the Academy.

After one hour of choreography with Mandy Moore, 23 more dancers were chosen to move on to the Academy.