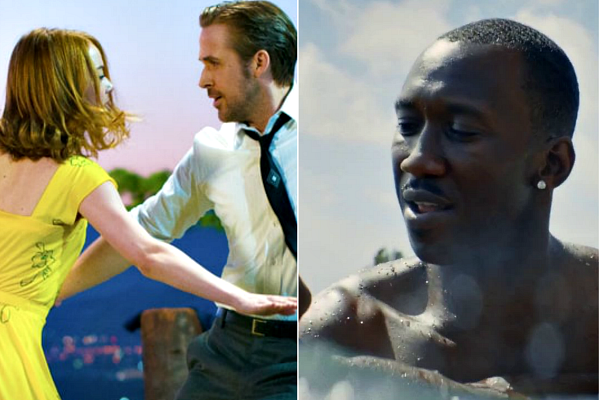 This year’s Oscars 89th Academy Awards show was hosted by comedian Jimmy Kimmel who helms “Jimmy Kimmel Live!” which films across the street from The Dolby Theatre where the awards ceremony takes place on Hollywood Blvd.

Some of the heat was taken off Kimmel when singer Justin Timberlake performed an outstanding opening number singing and dancing to his “Can’t Stop the Feeling” song from the movie Trolls that began outside of the Dolby Theatre and ended on the stage.

Kimmel was one of the most promising Oscars host, yet he teased that this hosting stint would be a disaster. Kimmel’s hosting was not the disaster of the night. It was the last category to win – Best Motion Picture that was disastrous when presenters Warren Beatty and Faye Dunaway read the winner card as “La La Land”. However, it was indeed “Moonlight” that won. The mistake was rectified after “La La Land” producer Jordan Horowitz took to the stage and read the print on the card “Moonlight.”

Kimmel brought his same antics from his Live show to the Dolby stage such as an Oscars Edition of Celebrity Mean Tweets. He also played a practical joke on some real-life tourists who landed inside the Dolby during the actual Oscars ceremony to meet some really famous people – Denzel Washington, Ryan Gosling, Keith Urban, Nicole Kidman. Not exactly what they were expecting, but a perfect moment for lots of cell phone photos and selfies with major celebs.

Then there was popcorn and candy! Yes, and they both fell down from the ceiling of the Dolby Theatre wrapped in white parachute-like packages onto the audience.

“The #Oscars are about the movies and you can’t have movies without movie candy, it’s un-American.” – Jimmy #Kimmel #Oscars pic.twitter.com/YH5lMuyF1I

The Academy Awards theme this year was Inspiration. Actors told stories of how they were inspired by other actors before they got started. Then they were joined by those inspirational actors onstage to present with them. 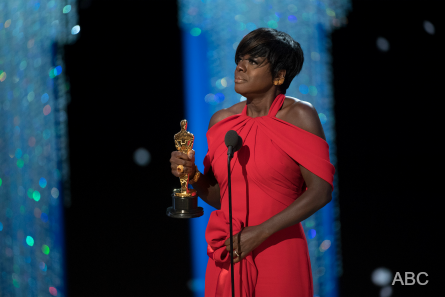 Viola Davis received her Oscar award to a standing ovation. During her acceptance speech, Davis stated thank God she’s an actor, because it’s “the only profession that celebrates what it means to live a life.”

Actress Charlize Theron was joined onstage by Shirley MacLaine, an actress who inspired her, to present the Best foreign language film award.

Best foreign language film of the year
“The Salesman” Iran

Winner of Best foreign language film, Asghar Farhadi, was not present. Instead, he sent Iranian American engineer Anousheh Ansari to read his acceptance speech thanking The Academy for his second win. The written statement included the reason why he wasn’t there – out of respect for his country regarding the travel ban that the U.S. is currently upholding. There was an applause from the audience.

After “Piper” win, presenter, spoke about how he’s against any wall – regarding the wall proposed to be built between America and Mexico.

Then, The Academy did a tribute to favorite films of various movie fans from other countries. Some favs included “Suicide Squad”, “The Big Lebowski”, “Frankenstein”. One person said movies are magic and “magic is universal”.

Then Felicity Jones from “Rogue One: A Star Wars Story” presented Best Achievement in Visual Effects which went to “The Jungle Book.”

A great moment happened when Actor Seth Rogen’s inspirational actor Michael J. Fox joined him on stage with a DeLorean similar to the one the”Back to the Future” movie which made Fox a household name. They presented the award for Best Film Editing. Rogen revealed he came wearing “cool shoes.” 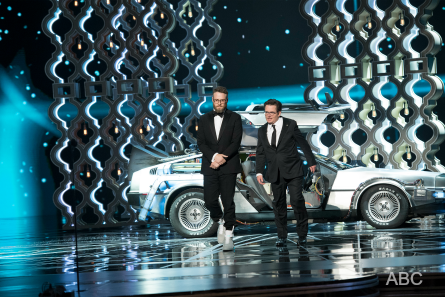 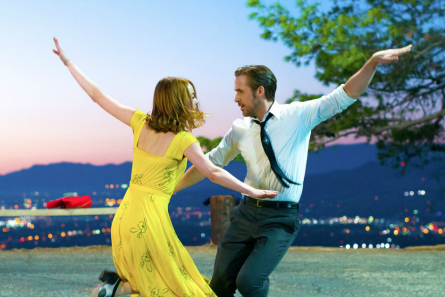 Matt Damon was introduced onto the stage with Ben Affleck who was referred to as “guest”. Then Jimmy Kimmel kept their feud going by trying to play him off the stage before he announced the nominations.

Original screenplay
“Manchester by the Sea” Written by Kenneth Lonergan

Amy Adams came out all beautiful and shiny looking like an 1940’s Hollywood Siren. She announced the Best Adapted screenplay. 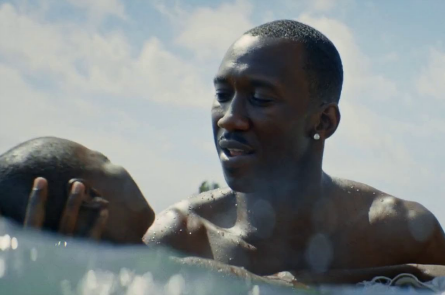 Damien Chazelle at 32 years old is the youngest to win the Best Director Oscar in history. 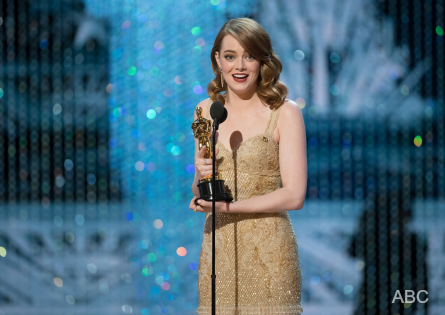 Best motion picture of the year

After presenters Warren Beatty and Faye Dunaway announced that “La La Land” won, then it was shortly corrected by the filmmakers of “La La Land” that in fact “Moonlight” was the film printed on the card. “Moonlight” won for Best Motion Picture of 2017. Update: Evidently, Warren Beatty was handed a copy of the Best Actress in a Lead role category instead of Best Motion Picture.

Kimmel tried to smooth things over by saying “we got to see some extra speeches…I told you I was going to screw this up.” He then stated “tomorrow I’m going back to my job and I’ll never come back here again.” 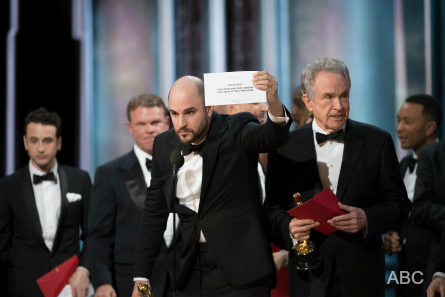 ALL NOMINATIONS FOR BEST MOTION PICTURE:

A full list of ALL the nominations can be seen here.