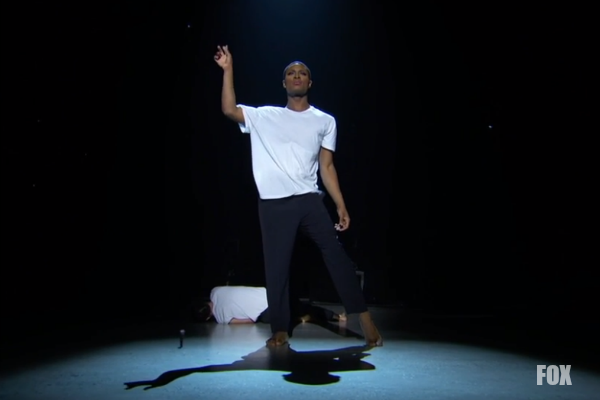 “So You Think You Can Dance” season 15 Top 6 took to the stage to perform a Mia Michaels routine for the show’s opening of the fourth week of live shows. Host Cat Deeley announced that the Top 6 will dance three more times throughout the episode. Once with All-Stars, who are some of the best in SYTYCD history. Returning All-Stars this week included Robert Roldan, Comfort Fedoke, and Jenna Johnson. A second time with their partners, and a third time with the Top 3 men and Top 3 women routines.

The All-Stars all made it to the Top 4 of their seasons. Two more dancers were eliminated at the end of this episode based on votes from last week’s performances. 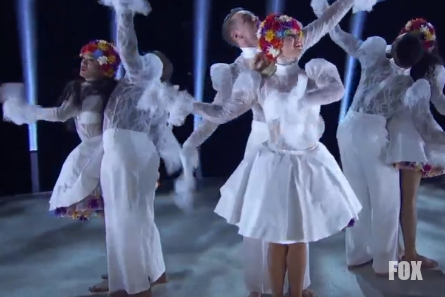 Jensen’s mentor is her big sister Linsay Arnold who was also a contestant on SYTYCD and went-on to be a pro dancer on “Dancing with the Stars.” While choreographing, Jenna stated that she was on Jensen to be more soft in her moves. It paid-off because the judges noticed. Mary commented that they loved Jenna’s choreography so much last season at the Academy that they brought her back. Mary called the routine “fast and furious footwork.” Nigel loved that Jenna softened Jensen. “You came to us as a good dancer and you’re getting better and better each week,” stated Nigel. Vanessa said Jensen took the reigns on that one. Twitch reacted that it was “crazy,” and Jensen “set it on fire.”

Genessy’s mentor is dance teacher Anthony Boren. She said the most important thing she’s learned from him is to just be her. Genessy added that the energy from last season’s winner Lex, whom was her All-Star partner, is insane. Nigel called the routine unique and orginal. He added that the judges’ expectations of Genessy have exceeded, and by dancing with Lex, it “freed” her up without worry and she could just dance. Vanessa said Genessy was expressive through her body and it was “beautiful.” Twitch stated that the dance would benefit her tonight and having that mask on forced her to “feel.” Mary said each time Genessy is on stage, she’s shown her true self.

Slavik’s mentor is SYTYCD past contestant/winner and All-Star Fik-Shun. Fik-Shun said he sees a younger version of himself in Slavik at his age. The Hip-Hop piece that Comfort choreographed was a time period piece from the 50’s and 60’s. Slavik reacted that it’s not the type of Hip-Hop that he’s used to. Vanessa stated that she loves Slavik’s swaggar. However, she could see him thinking. Twitch reacted that he agreed with Vanessa and Slavik wasn’t in the moment. A bit outside of his elements because it’s choreographed Hip-Hop instead of freestyle which is Slavik’s style. Twtich added that Slavik was “kind of checked-out” and didn’t get that angst that JaJa (his All-Star partner) had who carried the piece. He advised him to use his last two chances in the show to prove himself. Mary said Slavik improves each time. Nigel advised Slavik to get his shoulders back and to “bring it in the next routine!”

Amy Berkoff, who trained Hannahlei, is her mentor. She’s trained Hannahlei for seven years and also choreographed Hannahlei’s solo SYTYCD audition. Robert’s choreographed piece sent Hannahlei’s character into a “downward spiral.” Marko said she has a lot of power. Hannahlei commented that she needs to show her emotion in this piece. Marko stated that we’ll see a depth of emotion from her that we haven’t seen yet. Twitch called the piece “amazing” and so many different things all work at the same time. He called Hannahlei one of the hardest working dancers along with Marko who’s also one of the hardest working dancers that’s ever been on the show. Mary called it brilliant and all transisitions were “incredible.” Hannahlei brings class to the stage and we see that hard work, stated Mary. Nigel joked that all the dancers are seen leaving their partners tonight (through the choreographed pieces). He said when Hannahlei dances, she doesn’t look small due to great extensions. Vanessa said it was just flawless. “You showed your spirit and heart” she added.

Jay Jay’s mentor is his dance trainer Mark Meismer. Jay Jay called Mark one of the best people he’s ever meant. Mandy Moore choreographed a Jazz piece for Jay Jay. She said on the show, Jazz doesn’t go well and she doesn’t know why. This week, the Jazz has a “funky” side said Jay Jay. He’s the only Jazz dancer left. His All-Star partner was Lauren Froderman, winner of SYTYCD season seven. Mary called this Jazz piece “out of this world.” No one looks like they’re having more fun than Jay Jay. Nigel was shocked that Mandy felt no one gets Jazz and thinks this routine changed it. Vanessa stated the way Jay Jay hit things and allowed them to flow. She hasn’t seen a weak thing from him. Jay Jay jumped over Lauren, who is 5’2″, during the routine. He was dared by Nigel to try to jump over Cat, who is 5’9″ (most likely 6′ in heels). He did it while Cat crouched down. Deeley fell on her bottom during the stunt. Luckily, she was not hurt and laughed it off. Deeley stated that if she doesn’t deserve an Emmy for that, then she doesn’t know what. 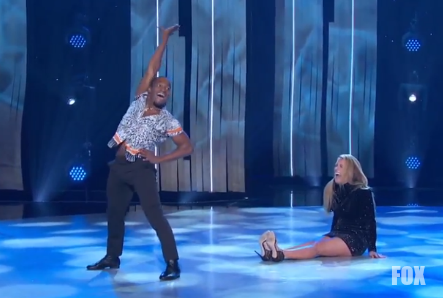 Pictured: Jay Jay and Cat Deeley after he jumped over her / Photo: FOX Network

The most powerful performance of the night came from Travis Wall’s choreographed routine for Darius who danced with Taylor from SYTYCD season 14. Darius’ mentor is his mother Monica Hickman who taught him if he wants to do something, he has to fight for it. Wall said he was bullied while trying to come-out of the closet. Taylor’s character represents society. Darius said he has to be comfortable in his own skin and be himself. He wore full makeup with lipstick and eyelashes in the routine. The judges gave this stunning performance a standing ovation. Nigel said he’s proud of Travis’ choreography in this routine and proud of Darius and proud of this show to be able to show this incredible choreography. Nigel called Darius his favorite. Vanessa said she’s “shook legit,” and called Darius so spectacular and special and has a long career ahead of him. Twitch said this piece transcends the competition and it’s a masterpiece. People present their best selves to Darius. While fighting back tears, Mary said it will be memorable and the most powerful piece of the night. “It will always be burnt into my heart,” stated Mary. Darius responded that he never thought he’d have to open-up like that. 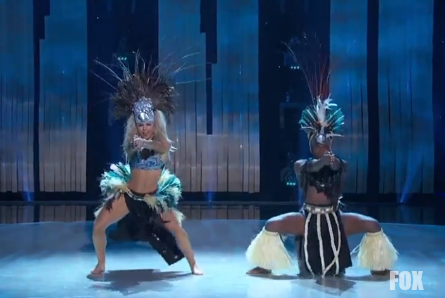 Jensen and Jay Jay were given a Tahitian dance choreographed by Tiana Liufau. The routine represents the ocean and the dance floor represents the ocean. Jensen reacted that this is a whole other world from what she’s used to which is ballroom.
Jay Jay said he wanted to give the Tahitian dance justice since it represents a culture. Vanessa thanked Tiana for bringing Tahitian dance to SYTYCD and said it was “amazing. I loved it so much.” Twitch reacted that the energy they put toward that, and “it’s dope.” Mary said they set the stage on fire and Jensen is a Queen. Nigel said seeing them dance like that makes him think that their thighs will be sore. “Only Tiana will know if the technique was right,” stated Nigel. 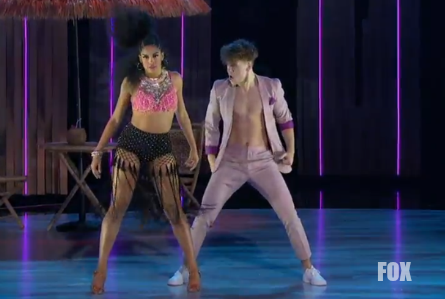 They had to dance Salsa. Slavik said they haven’t done anything “as crazy as this.” Genessy said Salsa is in her blood, and Slavik called the routine “very sexy.” After they performed, judge Twitch had more constructive criticism for Slavik by telling him “I have to push you.” Twitch observed that Slavik went right back into his head. He told Slavik that they can’t be having the same conversation next week if he’s still on the show. Mary said it’s mind-blowing that Slavik can catch onto all the choreography. “Did he get the style? No.” She called Genessy “fire on the stage.” Nigel said Genessy did most of the work and tonight exposed Slavik’s weakness a little bit. But, he doesn’t need to doubt himself. Vanessa agreed with the other judges and was happy to see Genessy and Slavik on stage together.

They had to perform an Argentine Tango choreographed by Miriam & Leonardo. Hannahlei said they’re trying to show that they can partner with other people and still make it to Top 4. Darius nicknamed his new partnership with Hannahlei “Darilei.” Nigel called their routine “sexy and sultry.” He said it was wonderful from both of them. Vanessa reacted that she’s on “team Darilei.” She said it was passionate and the fire they brought was amazing. Twitch said this is what happens when two powerhouses come together. Cat asked them if the chemistry was instant, or if they had a problem. They said not at all and it was easy. 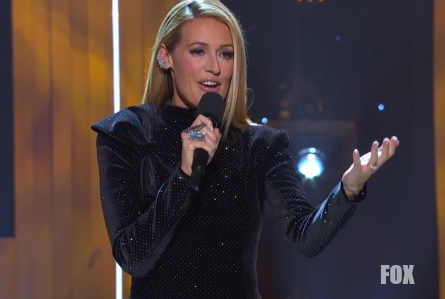 Photo: Cat Deely. Like to get her look? Keep Scrolling / FOX Network

After Darius and Hannahlei’s routine, host Cat Deeley held a card revealing the first voting result of the night. This would be the first dancer moving onto the Top 4 next week. No one was surprised when she called Jesen Arnold’s name.

Next, group performances came from the Top 3 men and the Top 3 women. After the Top 3 Men danced a routine choreographed by Christopher Scott, Nigel commented that Chris Scott’s work is always cerebral. “It demanded that you three were tight” stated Nigel. There were times during the performance that they weren’t, he noted. However, Nigel said he was very pleased with what they pulled-off considering the time constraints they had to work with to learn the choreography. Twitch stated that it’s really difficult dealing with three different styles and requires a collaboration of the minds. Mary thought that they were all strong.

Then next voting result of the night had Slavik Pustovoytov going through to the Top 4. Many viewers were shocked by this result. 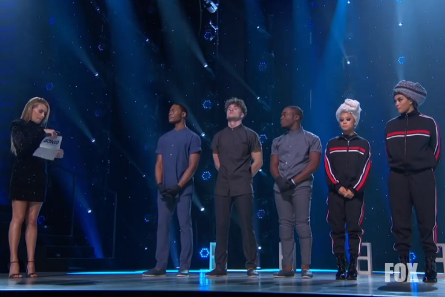 After the Top 3 women – Hannahlie, Jensen, and Genessy performed their group “Tron” like routine choreographed by Luther Brown, the judges commented. Vanessa said Luther brings down the house and she wants to be part of that Femme Bot! Twitch stated “if that’s what the future looks like, sign me up!” Mary said she loved it and called it girl power! Nigel said the power and elegance “really works well.”

RESULTS FOR THE TOP 4:

Cat Deeley announced the rest of the voting results at the end of the episode. The dancers who had been previously announced as going through to the Top 4 were – Jensen, and Slavik. Next, Deeley added Hannahlei Cabanilla to the Top 4. Nigel said of the remaining three dancers who were Darius, Genessy, and Jay Jay, that all three dancers have been absolutely incredible, and reminded everyone that the results are based on last week’s votes.

NEXT WEEK: The Top 4 dancers perform for America’s votes to reveal who’ll be crowned season 15’s “Amercia’s Favorite Dancer” which will be revealed September 10th in the season finale episode.  “So You Think You Can Dance” airs Mondays at 8/7 c on FOX Network.

Like Cat Deeley’s dress? Get a similar look minus the bow here! 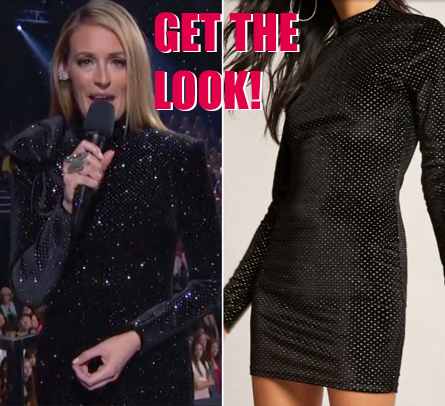