LET’S MAKE A DEAL: Returning With a New Look!

LET’S MAKE A DEAL: Returning With a New Look! 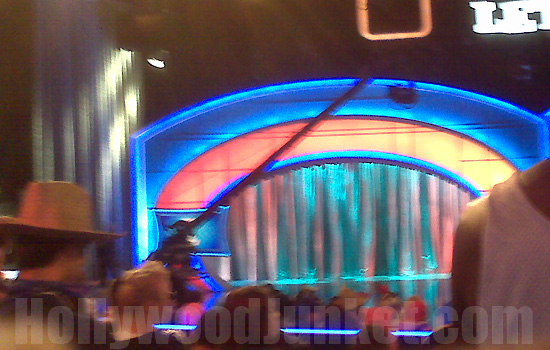 It’s the only game show where the audience is the main focal point and where costumed-dressed contestants are selected. Made a success by original host Monty Hall in the 1970s, this statistics-driven game show made an equally successful return with the very similar traditional look. This season the “Let’s Make a Deal” set has been updated to the 21st century. Flat television screens have been added to the set to display the numbers next to the curtains. When numbers are not displayed, the “Let’s Make a Deal” logo is shown. Blue Lights have been added to the wall behind the front pit audience seating. Wayne Brady sports a new, cleaner look as well with no hair. He no longer makes his entrance via the door behind the last row of audience seating, normally entering down the walk way. Now, Brady enters from stage left to start the show.

Gone is the show’s audience warm-up host, and added is a new member to the current crew of: Wayne Brady, Tiffany Coyne (model), and Jonathan Mangum (announcer/sidekick). That new member is D.J. Kat Graham (NOT the same ‘Kat Graham’ who is an actress/singer) who works from his own blue-lit podium that is placed in the audience.

Two of today’s games that we saw were: “Movin’ On Up”, and “Follow the Leader”. In “Movin’ On Up” a player is shown a prize (today is was a new SUV) that they are playing to win. The “Movin’ On Up” board has four rows of numbers. In each row, the contestant must select a number that has a money value attached to it and not a “Zonk” which immediately ends their game. They start with the bottom row (1, 2, 3, 4, 5, 6) and go up from there until they reach the top row with only two numbers left (1, 2). In that row they must pick the number that has “win” attached to it.

The “Follow the Leader” game has three players. Whatever the lead player selects for his or her game choice, the other two contestants must go with that choice and they get the same prize. The trio takes turns as leader. In the last round, the players play separately from each other and make their own selections if they want what’s behind a curtain on-stage, what’s inside an envelope, or what’s in a box.

Some of the prizes that were offered on today’s show included: a Sub-Zero refrigerator, a bed set, 2 scooters, a trip to Switzerland and St. Lucian, 2 diamond rings, one year’s worth of shoes, and money amounts of $1500, and $500, and more! There were plenty of “Zonks” given-out as well!